Successful transplants also a boon to families of patients 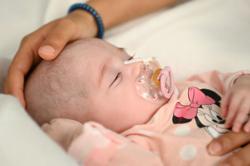 PETALING JAYA: Successful organ transplants have not only saved and improved the lives of many patients, but also left meaningful impact on their loved ones.

Fatimah Osman said she was ela­ted when her son Muhammad Fikri Nor Azmi, then 15, got his second chance at life after he underwent a heart transplant in June 2010.

She described the impact of her son’s recovery as humongous not only for him but the entire family.

“We were on the verge of losing him and we are grateful,” she told The Star.

Fatimah said her family feels for the many Malaysians waiting for organ transplants.

Although there is more awareness on organ transplants today, much more has to be done, she added.

Fikri’s transplant was made possible when a 21-year-old donor, with the consent of family members, donated his organs at the Selayang Hospital.

Sue Tan, 54, said she is glad her son Ronney, now 16, could lead an almost normal life after she donated one of her kidneys to him in 2008.

She said Ronney was born with only one kidney, which was damaged after an infection when he was just three months old.

“I was a compatible donor and the transplant was carried out when he was eight years old,” she said.

“Today my son is even taller than my husband and I,” Tan added, which astounded his doctor who expected his growth to be stunted.

Besides allocating resources for organ transplants, Tan said more needed to be done to encourage the public to become donors.

“I have met parents at hospitals who are reluctant to donate kidneys to their own children because of fear,” she said.

Meanwhile, Mohamed Afzanizal Mohd Azhar said he is thankful to his father for donating a kidney to him in 2009.

The 33-year-old business analyst with a local private university considered himself lucky to have both a willing donor and the resources to undergo the transplant.

“Had it not been for the transplants, I may not be where I am today in life,” said Afzanizal, who was born with Alport syndrome, which resulted in kidney failure when he was 16.

Carrying on beyond kidneys

Not enough donors, surgeons or teams for organ transplants