TalentCorp chief executive officer (CEO) Shareen Shariza Abdul Ghani speaking to the press at the Career Comeback Fair in Kuala Lumpur on Wednesday, a job fair specifically for women wanting to return to the workforce by connecting them with employers who are open to hiring women who are on career breaks.

THE belief that employers prefer singles when hiring or promoting, is false.

Employers recruit candidates based on their qualifications, skills, personality, attitude, and experience, he insists.

“Being single or married has nothing to do with the position you hold in a company.

“To recruit based on a woman’s marital status would amount to gender and status discrimination. Employers won’t implement such a policy.”

Women – single or married – make up half the nation’s population and account for 63% of enrolment in Malaysia’s public universities in the 2013/14 academic year, according to Talent Corporation Malaysia (TalentCorp) chief executive officer Shareen Shariza Datuk Abdul Ghani.

What’s worrying though, is that women – including singles – are exiting the workforce in their late 20s to early 30s. Women in this group, she says, take career breaks because of family commitments, like having to care for a family member, and for personal reasons.

The 2013 TalentCorp-ACCA Retaining Women in the Work-force survey reflects this trend. Raising a family, the lack of work- life balance and wanting to care for a family member, she says, are the top three causes of women leaving the workforce.

“What’s alarming is that unlike other neighbouring countries, once Malaysian women leave the workforce, they don’t typically return unlike women in other Asian countries like Japan and South Korea, where women tend to return to the workforce in their later years.”

Promoting equitable practices and increasing women’s participation in the workforce is not only the right thing to do but it’s also a smart economic move, she believes.

To date, the programme has helped over 300 women find career opportunities with over 100 employers, including multinationals, she says, adding that inflexible working arrangements and the lack of appropriate infrastructure are the top reasons for women’s low participation rates in the workforce.

“There are no two ways about it. An organisation seeking to be future-ready must embrace flexible work arrangements that not only maximise productivity and performance, but are also beneficial for women, men and young talent in general who value career flexibility,” stresses Shareen Shariza. 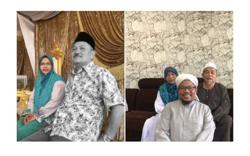