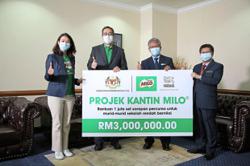 KUCHING: One in four Malaysian children skip the most important meal of the day - breakfast - at least three times a week, a Nestle backed study has found.

The current breakfast trends of Malaysian children are "not looking optimistic", said Lim Chian Yin, a nutritionist with the company.

Citing recent findings from MyBreakfast Study, a survey on breakfast habits involving 8,705 students, it found breakfast skipping was especially prevalent among the bumiputra community in Sabah and Sarawak.

There was a distinct correlation of children with higher physical activity levels among those who ate in the morning, she added.

"Our bodies lose about 80% of energy reserves after long hours of sleep. Hence, a good breakfast is important so we can maximise performance, be it mental or physical."

Dr Tee E Siong, who is chairman of the Nutrition Month Malaysia steering committee, agreed. "Most Malaysians don't seem to realise just how important the first meal of the day is."

Both were speaking to the media after a Milo Malaysia organised Breakfast Day event, which took place at Padang Merdeka here Sunday.

About 5,000 people took part in 3km family fun runs and 5km events. Also held were Zumba classes, football based games and lucky draws at the open space in the historical quarter of the state capital.

"In 2015, we reached out to an estimated 3.2 million school children," said Milo marketing manager April Wong.

"This year, we are expanding our reach to more parents to rethink their breakfast practise and to take action as role models to cultivate a positive long-term habit. Kuching has given us such a positive response."

Malacca was the first city to host this year's Milo Breakfast Day in March, followed by Kuantan, Kota Kinabalu, Johor and Penang.

On May 29, the event will conclude at Putrajaya.