Stamp of approval: The National University of Singapore is among the world’s top universities that recognises the UEC. — Filepic

MORE than 800 universities in the world open their doors to UEC students (as long as their academic results meet the entry requirements), according to the latest compilation by the Dong Zong (United School Committees Associations of Malaysia).

“Based on The Times Higher Education World University Rankings Top 200 of 2014, more than 70 of these world-class universities have accepted the enrolment of UEC graduates to pursue tertiary education in their universities,” says Dong Zong in an internal report on “Access to Higher Education with UEC Qualification”, made available to Sunday Star.

The United Examinations Certificate (UEC) is a standardised examination conducted by the Dong Zong in the country’s 60 Chinese independent secondary schools. After studying for three years, students will sit for the junior UEC exam, and after six years, they will sit for the senior UEC exam.

In another report on the whereabouts of senior UEC leavers after they sat for their examination in 2013, the Dong Zong report says that out of 8,088 Chinese secondary school graduates, a total of 6,235 students, or 77.16%, chose to pursue further studies.

Within Malaysia, most UEC students are in private institutions and branch campuses of foreign universities.

Only two UEC graduates managed to get into local public universities.

Among foreign countries, Taiwan took in the largest number of UEC students with Singapore ranking second.

The other favourite destinations of the 2013 batch were Australia, Britain, and China.

The Dong Zong says this report tracing UEC students is the outcome of a survey carried out from June to November 2015. 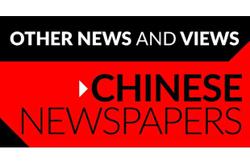