Too hazy to study in Sarawak

KUCHING: Schools were closed and flights disrupted as air quality reached very unhealthy levels with the index exceeding 200 in parts of Sarawak.

The Air Pollutant Index (API) reached 209 in Kuching at 10am and 210 in Samarahan at 11am yesterday, forcing 463 schools in both divisions to be closed.

The state Education Department issued an advisory to close the schools early yesterday morning when the API was hovering near 200.

In a statement yesterday evening, the Education Ministry said these schools would remain closed today. 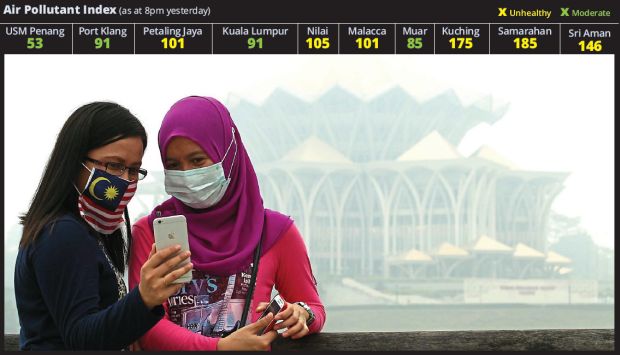 Never too hazy for a selfie: Office workers Cecilia Lia and Zathul Ezzah, with face masks on, posing for a picture at the Kuching Waterfront. The API reading in the state capital was over 200 at 10am Thursday. -ZULAZHAR SHEBLEE/The Star.

It added that the district education office and schools had been directed to inform parents and guardians about the closure.

Fireman Wan Afzal Wan Abdul Rahman, 40, said he was worried when he heard about the closure on radio at 8am.

“I immediately rushed to school to pick up my daughter, who is in Year Three. It’s worrying because the air is not healthy,” he said.

Morzeyan Jumat, 35, said she had to pick up her four children, who are in kindergarten up to Form One, from four different schools.

“It’s good that the schools are closed as it’s getting difficult to breathe,” she said.

Headmistress Liaw Hui Lin said parents had already been calling her school since early morning before she received the official notification at about 8.25am.

“Even this morning a lot of students were not around as the air was unhealthy and we understand why parents don’t want their children to be in school,” she said yesterday.

Serina Lim, who owns a dance and fitness centre with her husband, said her family was increasing their water intake and getting creative with assorted fruit juices to cope with the hazy conditions.

“My husband has had to use inhalers for the first time in his life and our toddler’s sensitive skin has been flaring up since the haze started. Because of this, we have just invested in two air purifiers,” she added.

By 3pm, Malaysia Airports Bhd confirmed that four flights could not land at Kuching International Airport and had to be diverted while another five flights from Kuching were cancelled.

The affected flights were those to and from Kuala Lumpur, Tanjung Manis, Pontianak and Mulu.

Seven flights took off late while 11 more could not land on time.

Related story:
Cleaner air over weekend, but haze back on Tuesday