KUALA LUMPUR: One half of the couple who stole from the bank accounts of four MH370 passengers was sentenced to four years prison and three strokes of the cane.

On April 28, Basheer plead guilty to four charges of using a debit card and an ATM card to withdraw a total of RM7,650 from the account of Chinese national Tian Jun Wei.

Although Basheer had pleaded guilty, deputy public prosecutor Fadhli Mahmud urged the court not to reduce the severity of the punishment. 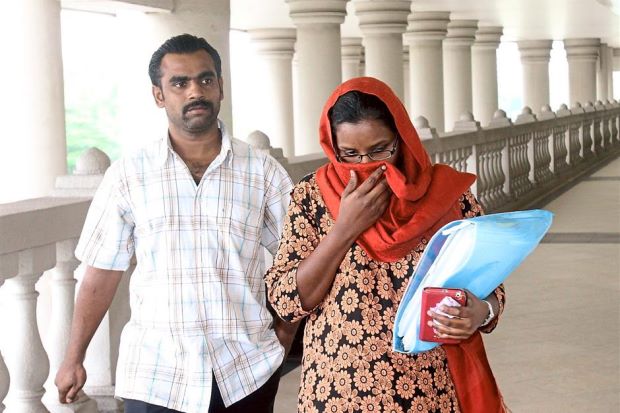 Duo to know fate soon: Nur Shila and her husband Basheer will know their fate next week.

He said a discount for guilty pleas was not mandatory, adding that in this case public importance outweighed private importance.

"The accused actions brought further pain to the families, who were already grieving over the loss of their loved ones," said Fadhli on Wednesday.

Judge Norsharidah did not issue a sentence for Basheer's wife, bank officer Nur Shila Kanan as she was on sick leave due to diarrhoea, according to a medical certificate from Hospital Kuala Lumpur.

However, the court later issued an arrest warrant for Nur Shila, saying she would be sentenced on Wednesday if caught or else her case would be fixed for mention on Thursday.

Nur Shila also faces prison for making illegal transfers and withdrawals, amounting to RM85,180 in total, from the passengers' accounts.

Nur Shila was hit with 12 principal charges in relation to transferring money from the HSBC Bank accounts to other bank accounts, theft, getting approval for a debit card and making a new Internet banking application with intent to cheat, and using forged documents at the HSBC branch in Lebuh Ampang from May 14 to July 14.

During trial. it was revealed that HSBC returned the cash to the account holder's families, while the criminal duo's bank accounts were frozen.