KUALA LUMPUR: Good news for Internet users. Charges for broadband services are expected to drop by more than 6%, effectively leading to lower prices for such services despite the introduction of the Goods and Services Tax (GST).

An announcement on the lower rates would be made this month and the effects of the new pricing would be immediate, said Communications and Multimedia Minister Datuk Seri Ahmad Shabery Cheek.

To encourage more Internet use, he said broadband rates must be more affordable.

He met with the chiefs of the telecommunications companies recently and was scheduled to see them next week to further push for lower broadband rates.

“The telcos have agreed in principle to reduce the tariff.

“They will be announcing the (new) rates this month and these will be better. There will be more than a 6% reduction,” he said at a #TanyaGomen session with the public yesterday.

However, Ahmad Shabery could not say how much lower the rates would be.

Industry experts believe the drop should be more than 10% to 20% for a meaningful impact on consumers.

The reduction is also necessary because prepaid users are feeling the pinch because they now have to pay 6% more for the service with the implementation of GST.

Previously the cellular companies absorbed the 6% Sales and Services Tax for prepaid customers but have now passed the 6% GST on to the consumers and this has irked many users.

Ahmad Shabery said there was a need for standardisation of the tax between postpaid and prepaid users because previously only the postpaid customers bore the 6% sales tax.

“If the overall charge can be reduced and it is more than 6%, then why not,” he said.

A reduction in broadband rates will be a way to help cushion the GST impact on consumers, especially the prepaid users, and if the drop in rates is big, all users will benefit.

There are about 20 million Internet users in the country, according to ministry statistics.

Meanwhile, the big four telco chief executives in separate statements said they were supportive of the minister’s call to lower broadband rates.

DiGi.com Bhd CEO Albern Murty said that “lower prices are in line with our aspirations to deliver Internet For All, which is rooted in the principle of affordable access for broadband and mobile Internet services”.

Maxis Bhd CEO Morten Lundal said it would work with the ministry on this matter. 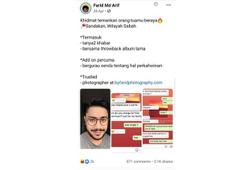