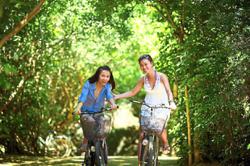 Kalliegan says the family is looking for an answer and hopes that the results of the post-mortem on Dr Sebastian will finally give them peace.

PETALING JAYA: The family of Dr Sebastian Joseph, who died mysteriously in Langkawi in 2010, hopes for a closure after a second post-mortem was carried out on Tuesday.

Kalliegan Anthony Joseph said on Tuesday that the family was looking for an answer and hoped that the results of his brother's post-mortem would finally give them peace.

“I found my brother in a kneeling position, with his hands fisted behind him and blood on his head.

“The first person who did the post-mortem was a general practitioner who reported that the cause of death was unascertained,” he said.

Kalliegan claimed that the medical officer, who did the initial post-mortem was not a pathologist, and as such was not qualified to conduct the procedure.

“We do not know what the outcome would be, but we are waiting patiently,” he said.

Dr Sebastian was a medical officer at Klinik Kesihatan Kuah, Langkawi, during the time of his death.

He was found dead by his brother on Nov 17, 2010, who went to check on him, after he failed to answer calls from his family for three days.

The remains of Dr Sebastian, who was 30 at the time of his death, was exhumed last month and sent to Universiti Malaya Medical Centre (UMMC).

The post-mortem, however, was stalled as Australian pathologist Dr Richard Byron Collins, who was enlisted by the family to assist in conducting the procedure, could only do so in the presence of a local pathologist.

The family’s lawyer M. Visvanathan said that the position in which the deceased was found was very peculiar.

“Nobody dies suddenly in that position, with blood on them.

“To add to that, the house was found locked from the inside, but the family say that no keys were ever found,” he said.

He added that Dr Sebastian had no illness, was not suicidal, and neither did he abuse drugs nor alcohol.

“The family needs to know how he died, and only after that can they be at peace,” he said.

Visvanathan said that there would be an inquest at the Alor Setar Hospital after the family receives the results of the post-mortem.

They are expecting the results to be released within a few months.