SHAH ALAM: When found by the authorities, the animals – a Malayan Sun Bear, four Barn Owls and a Common Palm Civet – were crammed in tiny wire cages stacked in the back of a Naza Ria.

The animals, which were being transported from Seremban when the car was ambushed by wildlife officers at a toll plaza, were part of a hoard that included a Leopard Cat and a Malayan Porcupine being trafficked online.

Selangor Department of Wildlife Protection and National Parks (Perhilitan) director Rahim Ahmad said that two brothers, aged 20 and 29, were stopped at the Air Hitam toll plaza on the SKVE Highway on Oct 10.

“We seized one Malayan Sun Bear, four Barn Owls and one Common Palm Civet. We also confiscated their vehicle, a Naza Ria,” he said, adding that based on information gathered from the brothers, officers raided their house in Seremban on the same day. The Barn Owls (above), the Leopard Cat and the Malayan Sun Bear (below)which were seized from the duo.


“We found one Leopard Cat, 20 Barn Owls, two Sunda Flying Lemurs and one Malayan Porcupine from the house.

“The porcupine was already dead when officers got to the house,” Rahim said here yesterday.

Under the Wildlife Conservation Act, the Malayan Sun Bear, Leopard Cat, Barn Owl and the Sunda Flying Lemur were fully protected animals while the Common Palm Civet and Malayan Porcupine were protected.

“The case is being investigated under the Wildlife Conservation Act,” he said.

Under Section 60(1)(a) of the Act, the penalty for keeping protected species without a valid license is a fine of up to RM50,000 or a jail term of up to two years or both. 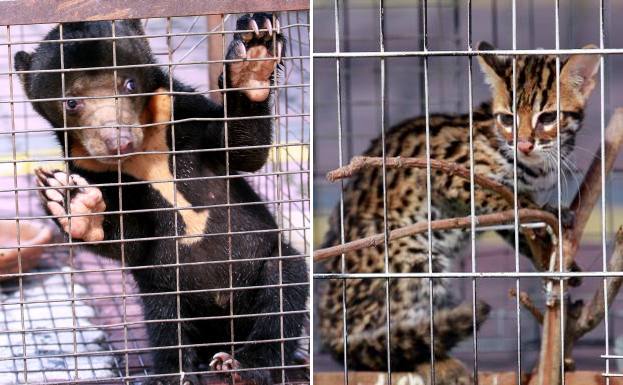 Under Section 68(1)(a) of the same Act, those having fully protected wildlife without a special permit can be fined up to RM100,000 or jailed up to three years, or both.

Rahim said the seized wildlife would be released back to their natural habitat in a protected area upon acquiring a court order.

“The public is reminded not to carry out activities involving the selling, buying or illegal possession of wildlife,” said Rahim, adding that the two men were nabbed following a public tip-off.