PETALING JAYA: The ALS ice bucket challenge has truly caught on in Malaysia with Youth and Sports Minister Khairy Jamaluddin and Tourism Minister Datuk Seri Nazri Aziz the latest to take it up.

On Wednesday, Khairy uploaded a video of him taking up the challenge and throwing out nominations to Malaysian squash queen Nicol David, Urban Wellbeing, Housing and Local Government Minister Datuk Rahman Dahlan and Nazri. 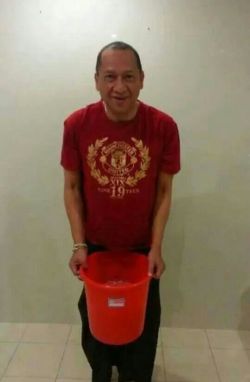 Nazri ready and waiting with his bucket

Khairy later tweeted a picture of Nazri accepting the challenge with the note, “So Chief Nazri Aziz has met my challenge. Waiting for @mpkotabelud @NicolDavid #IceBucketChallenge.”

The ALS ice bucket challenge has gone viral on social media, with both celebrities and regular folk dumping ice water on themselves to create awareness of amyotrophic lateral sclerosis (ALS) or better known as Lou Gehrig’s Disease.

The challenge dares participants to be video recorded as they pour iced water on themselves.

ALS is defined by the ALS Association as a progressive neurodegenerative disease that affects nerve cells in the brain and spinal cord.

With muscle action affected, patients could become totally paralysed as a result of the disease.