PETALING JAYA: When he came home from work, MH17’s first officer, 29-year-old Ahmad Hakimi Hanapi, would always rush to play with his then eight-month-old son Abderrahman.

He would carry him, play with him, change him and spend as much time as he could with his son.

His wife, Asmaa Aljuned, said Ahmad Hakimi, also known as Kimi to friends and family, was the most loving father figure she had ever met.

In fact, the last words Ahmad Hakimi said to his wife before taking off on Flight MH17 was how much he missed his now nine-month-old baby. 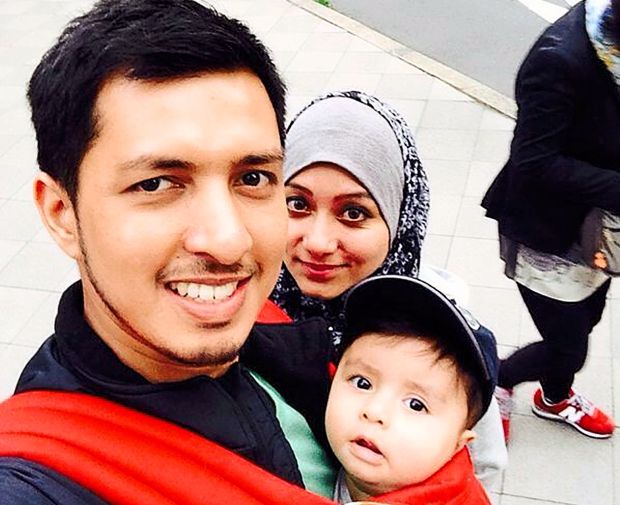 “(Hakimi) was very attached to Abderrahman and enjoyed taking care of him. Whenever Kimi came home, he would not want me to do anything for the baby.

“He told me that when he was home, it was his job to take care of Abderrahman. The first thing Kimi would do in the morning was to pick up Abderrahman and take him for a walk and spend time with him,” she said of the doting father.

“He would make up for the time he was away. When Kimi was at home, he would always hold on to Abderrahman. He wouldn’t put Abderrahman in a high chair or a stroller but carried him all the time,” she said.

The third child of four siblings, Ahmad Hakimi was also a very filial son, and ensured that his parents were well taken care of.

“He was very much a family person. He did not go anywhere without asking his mother and sisters what they would like him to get for them.

“Family time was his idea of fun. He would bring the family travelling whenever he could,” said Asmaa, adding that Hakimi had taken two weeks’ leave from work in August to go on vacation with his family.

“He wasn’t an ustaz, but was always particular about religion. He didn’t say bad things about anyone; he didn’t smoke.

“This Ramadan, he never missed his Tarawih prayers at the mosque,” she said, adding that Ahmad Hakimi was a fan of popular Zimbabwean preacher Mufti Ismail Menk who ­visited Malaysia recently. “He always reminded me that we do not have to be an ulama or ustazah, but in whatever we do, we should dedicate ourselves to God.”

Asmaa said the last piece of advice she received from her husband was to be patient, that “Allah was always with those who are sabar (patient)”.

She has kept his last message as a reminder and encouragement for her to keep going despite the obstacles she faces.

Another issue that Ahmad Hakimi was also very concerned about and sympathised with was the plight of the people in Gaza.

“One night he saw a drawing depicting the orphans of Gaza. When he showed me the image, he hugged me and cried. He had never done that before.

“He said ‘muka macam Abderrahman’ (his face is like Abderrahman). I think he was afraid, imagining what would happen if Abderrahman grew up as an orphan,” Asmaa said.

Anyone in her position might want revenge for what has befallen her husband, but Asmaa said she had not put much thought about punishment for the perpetrators of the attack that brought down MH17.

“I don’t really want to think of him (Ahmad Hakimi) as being murdered or the incident as a crime. I accept his death as fated and something that was meant to be.

“Allah has taken him and this is a test that I have to go through. If anything, I would want the perpetrators to know how much they have taken away. As for retribution, I will let justice take its course. It is something that I do not want to dwell on because it does not change anything,” she said.

Carrying on a family tradition

Moving tribute from a loving wife

Stewardess to be laid to rest near Ipoh home

A heartfelt tribute at car wash