Thousands at May Day rally against GST

KUALA LUMPUR: Thousands gathered at Dataran Merdeka here on Labour Day on Thursday to protest against the Goods and Services Tax (GST).

Many came as early as 8am to enjoy the cool morning, some bringing their families, and waited for others to arrive to take part in the anti-GST rally.

They had gathered at several areas, among them, the KLCC, outside the Sogo departmental store in Jalan Tuanku Abdul Rahman and the National Mosque.

At about 2pm, the protesters, most wearing red t-shirts, and carrying banners and placards with anti-GST slogans walked in orderly fashion to Dataran Merdeka.

Policemen and City Hall officers had stationed themselves at various locations to look at safety and security.

Police have asked the organisers to adhere to regulations, which include not bringing along weapons or children, and to follow instructions from police personal for the safety or participants.

It is learnt that there was no serious incidents, except for a scuffle between staff of PAS Unit Amal, who provided the security, when some youths who wanted to go into Dataran Merdeka.

Here is a timeline of the events.

5.15pm: Organisers announce the rally is over and the crowd disperses.

Chegubard apologises on behalf of those involved in the brawl, and says he will look into the matter.

"If there really were SAMM people causing harm, I apologise," he said.

However, he said those wearing SAMM T-shirts may not necessarily be from the group as it can be bought anywhere.

He acknowledged that a group if people dressed in SAMM uniforms entered Jalan Raja at around 4pm in a ploom of orange smoke from a gas canister.

PSM deputy chairman M. Sarasvathy said that the turnout for the rally was "fantastic, simply fantastic".

"(People from) all walks of life, from all over Malaysia, came to protest against GST," said Sarasvathy.

He said this was the first time Malaysians had come out in large numbers to celebrate International Workers Day, May 1.

She said the crowd, which had gathered at several locations around the capital city dressed in red, showed the people's opposition to the imposition of GST, which will be implemented in April 2015.

4.30pm: The crowd at Dataran Merdeka is starting to disperse.

4.10pm: PAS central committee member Dzulkifli Ahmad goes up on a makeshift stage. "With the GST, the government can earn RM20 billion, where will this come from?" he told the crowd.

4.05pm: A scuffle breaks out between a group of Solidariti Anak Muda Malaysia (SAMM) members and Unit Amal officers on Jalan Raja, near Panggung Bandaraya. Unit Amal members could be seen trying to hold the line while the crowd pushed forward, throwing water bottles and engaging in a brawl with members of Jingga 13, who tried to calm them down.

SAMM member Romi Erawan, 24, said he and his group were unhappy that Unit Amal members were blocking the youth NGO members from accessing Dataran Merdeka.

When asked why they wanted to access the field, when both organisers and police had agreed that Dataran Merdeka was off-limits, the youth simply said, "there is no pact between lions and men".

"We want to access the field. We are here to fight, not fight physically but to fight the Government, but Unit Amal is blocking us," Romi mouthed off.

3.55pm: PAS deputy president Mohammad Sabu goes up on stage urging the crowd to remain where they are even if it rains.

He said wait for Anwar Ibrahim to speak as "it may be the last time we can hear his speech."

"We feel so hot, so the rain will cool us down," he said.

PKR deputy president Azmin Ali warned that there would be another huge rally against the sodomy conviction of Opposition leader Datuk Seri Anwar Ibrahim.

Anwar has appeal against his five-year jail term imposed by the Court of Appeal on March 7.

3.45pm: Signs of impending rain, with darkening skies and sound of thunder. Some protesters at Dataran Merdeka are starting to leave the area.

3.30pm: Crowd moving in orderly fashion from KLCC to Dataran Merdeka. Traffic police have been integral in ensuring smooth movement to destination. No FRU present. Cars have been honking at protesters.

2pm: Protesters gathering at the National Mosque have finished performing Zohor prayers and are preparing to begin their march to Dataran Merdeka, in about 15 minutes. PKR deputy president Azmin Ali is among those present.

At Sogo, PAS deputy president Mohamad Sabu has advised the crowd to follow orders and march peacefully towards Jalan Raja.

"Please do not enter Dataran Merdeka as it is closed for renovation. Please remain on Jalan Raja," he told them. 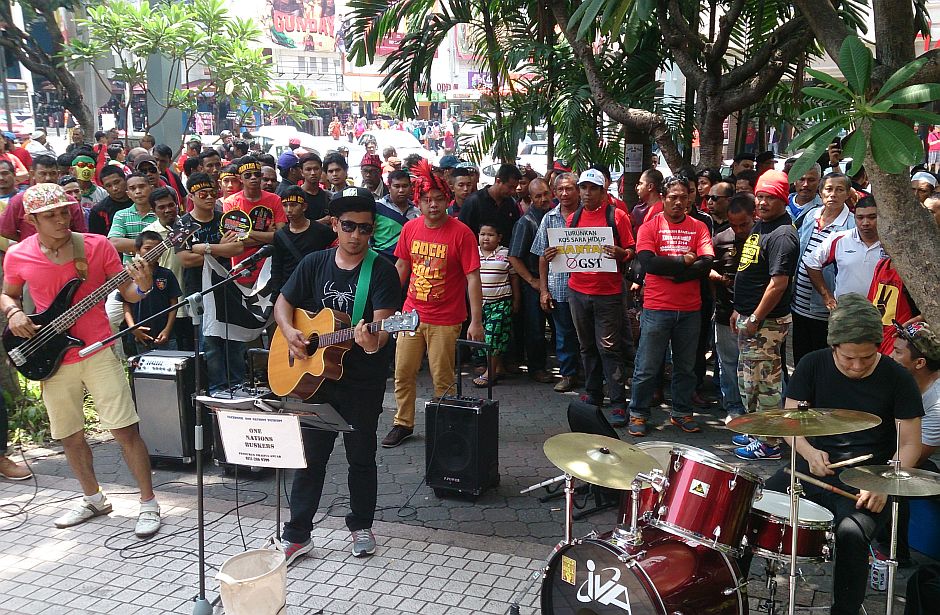 1.40pm: A group of musicians calling itself One Nation Buskers, is entertaining the crowd in front of Sogo, singing songs with politically-related lyrics. The crowd is expected to march to Dataran Merdeka at 2pm. 1.15pm: Organisers of the rally claim "irresponsible parties" distributing flyers with the words "Hudud is Barbaric" bearing the DAP logo.

A spokesman urged protesters at the National Mosque not to be provoked by the flyers and some claimed to receive stickers bearing the words "Hudud on all- Muslim & Non-Muslim".

Those present are told they will move from the National Mosque to Dataran Merdeka after Zohor prayers.

12.45pm: Hundreds of supporters have gathered in front of Sogo. Some motorists passing by honk, protesters are blowing vuvuzelas. The crowd of protesters outside KLCC chanting 'Tolak tolak GST'.

12.15pm: Traffic congestion near Dataran Merdeka, at the junction of Jalan Raja and Jalan Hishammuddin. There are also protesters gathering at Jalan P. Ramlee, including university students from Kedah. Protesters holding up banners at the Anti-GST rally.

Noon: Many protesters gathering at various points appear to be not too familiar with what GST is all about.

However, a group from Raub, Pahang, who arrived in a chartered bus at Dataran Maybank, were clear on the issue.

Selvarajah Maniam, 53: "We want the Government to know that we are against the new tax system that will only burden the people." He said he did not buy the Government's rationale for implementing GST.

Phang Kon Ming, 52, said he was here to let the Government know the people are against GST: "This will only bring more problems to us. We will continue to protest until the government backs down."

It is learnt the policemen in plain clothes are mingling with the crowd. Protesters gathering by Jalan Ramlee, including university students who travelled from Kedah to take part in the protest.

Among the many booths that have popped up around the National Mosque is a small stall selling religious and political badges and stickers managed by Balqis Harun and her husband, who run the business together full-time.

The 40-year-old Sungai Petani businesswoman and PAS member is a familiar face in the protest scene, having sold stickers and badges at many ceramah and recent rallies.

Balqis explained she came to protest against the GST and also make the most of the business opportunity.

11.50am: PAS MPs Datuk Kamaruddin Jaafar and Hatta Ramli drop by to check on the crowd at Sogo before making their way to Masjid Negara. Traffic at Jalan Tunku Abdul Rahman is building up, but steady. 11.45am: At Dataran Maybank, there are more police and Unit Amal officers than protesters. Traffic officers can be seen at the intersection between Jalan Tun Perak and Pudu Sentral, where traffic is still clear.

11.15am: Twelve police buses and trucks have arrived at Dataran Merdeka. At Sogo, a crowd is building up. There are peddlers as well, selling anti-GST t-shirts and bandanas. A police patrol car spotted a few minutes later, and five policemen are on standby. The crowd outside Sogo Kuala Lumpur.

10:30am: People start gathering as early as 9am in front of Sogo, one of the meeting points before marching to Dataran Merdeka. Some take opportunity to sell anti-GST t-shirts.

It is mostly quiet around Dataran Maybank, one of the four rally points. Around a dozen Unit Amal members, dressed in red and yellow, have gathered with more expected to join ahead of the 2pm protest. Peddlers selling masks and t-shirts by the streets.

Earlier, around 10am, four police officers were seen screening the area with a K-9 unit. The officers said it was to ensure there were no unwanted objects around the protesters for their safety.

Some protesters started gathering at the National Mosque around 9am, and stalls selling food and rally paraphernalia were set up.

Most donned red shirts of the rally, although some were spotted with green PAS logos. 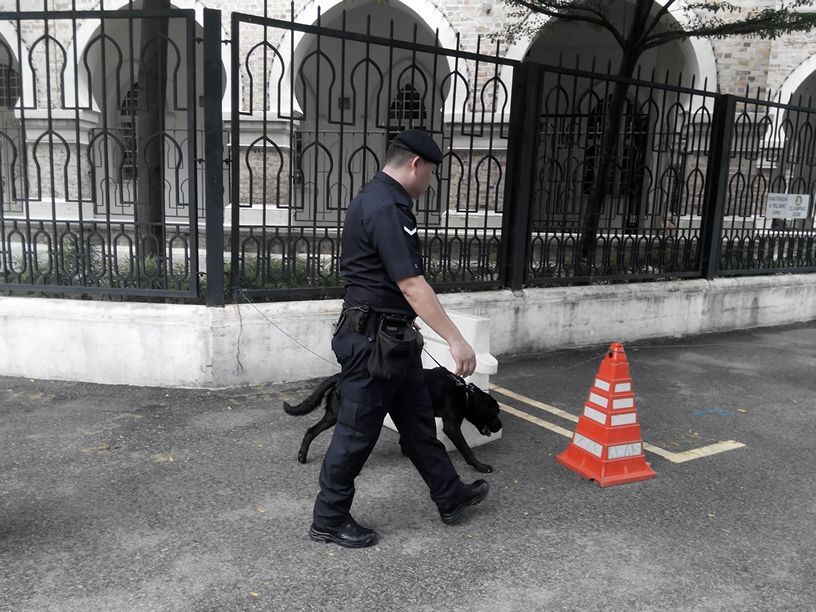 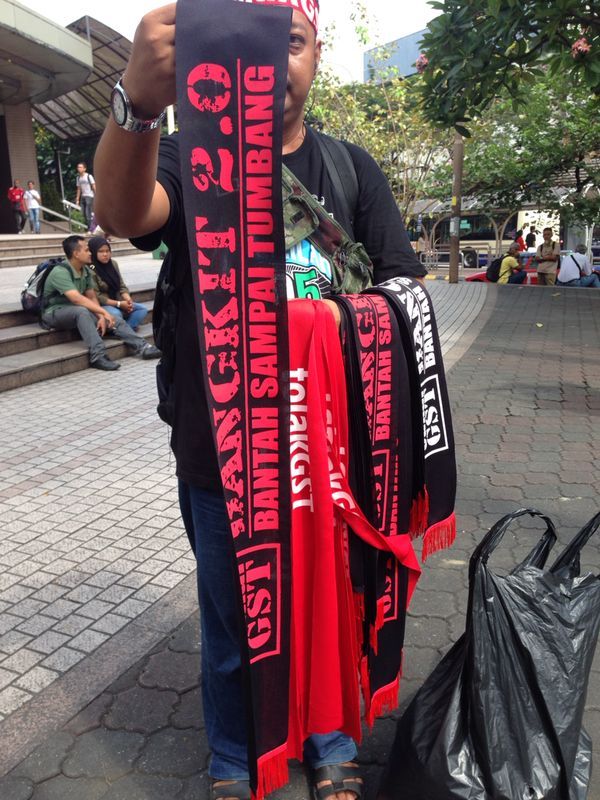