PETALING JAYA: The Tokay Gecko is no longer being widely traded as a supposed AIDS cure, but is still in demand for traditional medicine uses, said Traffic South-East Asia.

The wildlife trade monitoring network said millions of the attractively-patterned lizards were being harvested from the wild to supply the traditional medicine trade in East Asia, which has been going on for hundreds of years.

“At the same time, the trade in Tokay Geckos for Novel Medicinal Claims (NMCs), including as a supposed cure for AIDS, has declined markedly,” said its senior programme officer Kanitha Krishnasamy.

She stressed that there was no evidence to believe that it was a cure for HIV or AIDS, pointing out that the World Health Organisation had refuted such claims.

According to Traffic’s report, regional demand for NMC trade in Tokay Geckos reached its peak from 2010 to 2011, after rumours surfaced in 2009 that its extract could provide a cure. 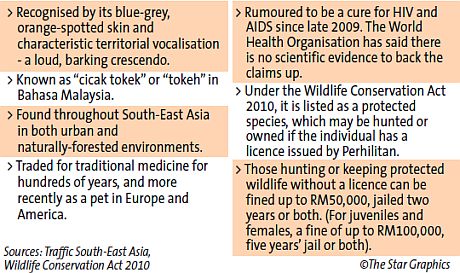 The 2013 report by Olivier S. Caillabet examined the Tokay Gecko trade in the region and included a case study in Peninsular Malaysia, the “purported centre of demand” in the NMC trade.

Despite the decline, it noted that the more prominent Tokay Gecko dealers appeared to be concentrated close to the Thai border, as well as being the source of the lizards entering the country.

“According to dealers interviewed during surveys, the primary consumers of Tokay Geckos for NMCs appear to be Singaporeans and locals. Some even claim the use of Tokay Geckos by Europeans and North Americans for medical research,” said Caillabet.

He said the interviews indicated considerable sums of money were paid, especially for large Tokay Geckos weighing over 300g, with some dealers claiming those weighing over 400g were valued at RM3.26mil (US$1mil).

“However, Traffic does not believe that these statements are credible. There is no evidence that such huge sums of money, as claimed by the dealers in Peninsular Malaysia, have been paid for Tokay Geckos weighing over 400g,” he said, adding that the dealers’ motivations for making such claims were not known.

The Tokay Gecko, sourced mainly from Thailand and Java, Indonesia, is highly in demand in the traditional medicine trade to treat various ailments and is widely consumed in mainland China, Hong Kong, Taiwan and Vietnam.

Caillabet said Customs import data revealed that Taiwan had imported around 15 million Tokay Geckos since 2004, while 1.2 million dried Tokay Geckos bound for Hong Kong from Indonesia were seized in 2011.

Missing Tokay gecko may have been sold say police