Bisaya group distances itself from Lajim 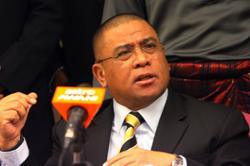 The majority of the Bisaya community, mainly in Beaufort, have benefited from Barisan government's policies and development, he said.

“We will continue to support Barisan, which has been able to transform the state,” Karmalin told a press conference here yesterday.

Karmalin, who is also state assemblyman for Lumadan which comes under the Sipitang constituency adjacent to Beaufort, also dismissed claims by certain groups that the community was against Barisan.

“That is not true. Lajim's decision is based on his personal interest and has nothing to do with the community,” he said.

Lajim is known as the Janang Gayuh (paramount leader of the Bisaya) within the community.

Karmalin said Lajim's decision to start a non-political Coalition for Change in Sabah was done in his personal capacity and had nothing to do with the association.

“We do not want Lajim's actions to be tied up with the association. We also do not want to push any agenda based on ethnic or racial lines as we subscribe to the concept of 1Malaysia,” he said.

Karmalin urged the people of Beaufort to continue to support Barisan and not be influenced by the latest developments involving Lajim.

Lajim on Saturday announced that he was quitting as Umno supreme council member and chairman of Beaufort Umno and Barisan division.

On Tuesday, he was sacked as Deputy Minister of Housing and Local Government. 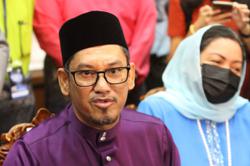