KUALA LUMPUR: The long and drawn-out case of Bernama journalist David Chelliah who made headlines 10 years ago, when a 14kg monorail wheel fell and injured him, has finally come to an amicable end.

The settlement was finalised through the initiated mediation process at the Kuala Lumpur High Court here last Friday.

The session was chaired by Judicial Commisioner Datuk Nik Hasmat Nik Mohamad on March 12; and both the plaintiff and defendants came to an agreement over the quantum of settlement.

Following the settlement and terms of confidentiality over the quantum being recorded, David’s case finally comes to a close.

The defendants through their insurance companies have to make the full payment within 45 days of the settlement being recorded by the court.

David, 50, a sub-editor with the national news agency, said he was relieved.

“I finally see the light at the end of the tunnel.

“I am happy and like to close this chapter of my life as it is not a pleasant one,” he said here yesterday.

David was seriously injured with his skull cracked in eight places when the monorail train safety wheel fell on him during its trial run along Jalan Sultan Ismail here, on Aug 16, 2002. 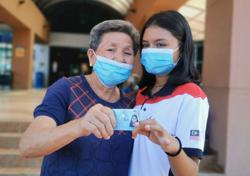 Monorail plans back on track