Sharing the views of his son, Umno Youth chief aspirant Datuk Mukhriz Mahathir, the former prime minister said: “Basically, what he (Mukhriz) said is true and this is not an effort to eradicate the culture and customs of other races. His suggestion for an integrated national-based school system is conducive to achieving national unity.”

Dr Mahathir said this in response to a question during a dialogue session at a forum on Leadership, Inter-culture relations and Understanding at the Perdana Leadership Foundation here yesterday.

Mukhriz had reportedly called for the Government to abolish the vernacular school system to enhance unity among the people and to check racial polarisation.

Mukhriz later said he had been misquoted, adding that he had merely called for vernacular schools to be integrated into the national school system.

Dr Mahathir said the concept of Vision Schools was to group Malay, Chinese and Indian students in one area and enhance unity.

“The idea was that the students share the same sports and recreation facilities, and the same assembly area but this was not accepted in entirety,” he said.

Dr Mahathir said a leader should also be sensitive towards the needs and demands of the majority in the community he represented because any failure to do so would result in his dismissal. 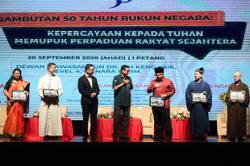