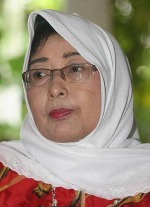 "We are also doing publicscreenings for the fever, and81,086 individuals havebeen checked so far" -DR ROBIA KOSAI

State Women, Family, Community and Health Committee chairman Dr Robia Kosai said that slightly more than of the 1,886 cases reported in the state was through the ACD system.

“The department has been making headway in detecting such cases using the system,” she told the state assembly here yesterday, while deploring the lack of cooperation from private clinics and medical practices.

“Only 49.9% of the data was collected through reports from medical facilities, and to date there is no law to compel private health institutions to report such cases.”

She was replying to Dr Lee Hong Tee (BN – Jementah), who had asked whether the department was doing enough to detect cases of the fever, as the number of cases reported did not reflect the actual situation.

Dr Robia, whose answers were read by Datuk Maulizan Bujang as she was on medical leave, explained that the department was also involved in awareness campaigns on the disease.

“We are also doing public screenings for the fever, and 81,086 individuals have been checked so far,” she said.

On the shortage of doctors at the Segamat Hospital, Dr Robia said doctors from the Muar, Batu Pahat and Johor Baru hospitals would soon be sent there as a temporary solution.