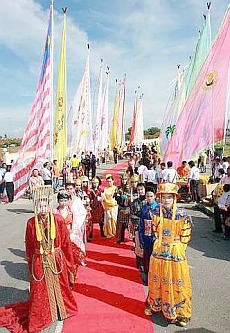 “Quanxi is about placing importance on relationships between friends, individuals and acquaintances. Mianzi means giving face or saving face for others,” said Najib.

He also called on Malaysians to learn languages other than their mother tongues.

“I have asked my son, who is in Georgetown University, Washington, to study Mandarin. My daughter can speak Arabic. I believe this a way to promote greater understanding among races.

“What is wrong if the Malays learn Mandarin and the Chinese speak Malay?” he asked when opening the 25th Chinese Cultural Festival at the Kedah Chinese Assembly Hall compound here yesterday.

Najib said such openness would augur well in the era of globalisation.

He also said the integration policy adopted by Malaysia had been successful.

Najib attributed the success of Malaysia’s racial integration to the foresight of our forefathers.

At the function, Huazong president Tan Sri Lim Gait Tong said Huazong and the 13 Chinese assembly halls in the states would work together with Najib to overcome problems in Malaysia following the economic crisis in the United States.

Malaysia Book of Records managing director Danny Ooi declared that the festival had featured the biggest chingay performance in the country.