AMONG the various heads of state and government who have seemed like permanent fixtures on the international political landscape in the past decade or so, no one’s perch has looked as precarious as that of Benjamin Netanyahu. There’s a degree of irony in the fact that Israel’s longest-serving prime minister apparently ran out of steam midway through the presidential term of one of the most fervent White House admirers he could conceivably have attracted.

It’s all relative, of course. Ever since its inception, Israel has never not had an ally in the White House, and occasional tensions have scarcely dampened US enthusiasm for – let alone hindered its munificence towards – what was identified early on as an invaluable satellite in a region once deemed broadly hostile to US interests.

The Obama administration, for instance, set a record in generosity, notwithstanding the toxic personal chemistry between Bibi and Barack. By then, it hardly looked like a case of the tail wagging the dog. The transformation may not have been sudden, but Netanyahu had few qualms about treating America as the tail. In this 2010 file photo, Biden prepares to sign the guest book before his meeting with Netanyahu at his residence in Jerusalem. — Reuters

He was happy to do most of the barking until another top dog chimed in, determined, as the leader of the pack, to be louder than anyone else. And loyally tagging along behind Donald was Jared Kushner.

Even Trump and Kushner apparently baulked, however, when Netanyahu talked about fulfilling his dream of annexing much of the occupied West Bank. Had the US flashed the green light, enabling him to pursue this project, Netanyahu would probably still be prime minister, and Israel would almost certainly be embroiled in a military campaign far more vicious than its most recent assault on the Gaza Strip.

The latter did not suffice to keep him in power – not least because a substantial proportion of Israelis are under the impression that he chickened out. Unable to pull together a coalition after Israel’s fourth election in two years, Netanyahu predictably ranted against the alternative regime that was taking shape.

In the past couple of weeks he has ludicrously labelled his opponents as dangerous and far left. The new prime minister, Naftali Bennett, is an extremist all right, but on the other end of the ideological spectrum. He has served Netanyahu as chief of staff and in various ministerial capacities, and throughout his political career has been described as even more right wing than his former master.

In the past he has not only enthusiastically hailed the idea of West Bank annexation but also proudly boasted about seeing “no problem” having “killed lots of Arabs in my life”. As a prime minister at the head of a disparate – and desperate – eight-party coalition, whose Yamina party boasts only six seats in the 120-member Knesset, he has at first indicated that there will be no movement on the Palestinian front.

The idea that the status quo can indefinitely be maintained while the state-sponsored settlers (whom Bennett has been proud to represent) keep gnawing away at what’s left of the diminishing Palestinian territories is one of Netanyahu’s proudest achievements. There’s no need to bother with a deal, not even with an eagerly compliant Palestinian “authority” in place under Mahmoud Abbas, who put off his elections to ward off the likelihood of another triumph for Hamas.

That likelihood has only increased in recent months, but yet another Israeli election before the end of the year cannot be written off. After all, the Bennett-led coalition has the bare minimum parliamentary support necessary, and Netanyahu as opposition leader will no doubt continue trying to topple his rivals. The “Bye bye Bibi” placards displayed by jubilant demonstrators after his comeuppance may prove to have been premature.

Does any of this matter very much? Not for the Palestinians. Sure, there is an Arab Islamist party on the fringes of the Bennett coalition, playing pretty much the sort of collaborationist role that the odd relatively unrepresentative black organisation did under South African apartheid. It also includes the Meretz and Labour parties, which remain wedded, at least formally, to the fantasy of a two-state solution.

What’s far more important is that the political centre has shifted sharply to the right – Netanyahu deserves some of the credit for that, but the narrowing of the political spectrum from the centre right to the far right is by no means an exclusively Israeli phenomenon. Hardly anywhere, though, is the political system more fractured: what once were factions have evolved into a plethora of parties, and one-party majorities are now a thing of the past.

Netanyahu has hitherto thrived on this dysfunction, but whether he can exploit it much longer remains to be seen. The criminal justice system may catch up with him. One thing that won’t change, however, is what Joe Biden reiterated last week: “Israel has no better friend than the United States.” Which in effect means nothing will really change. — Dawn/Asia News Network 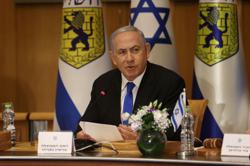