AS more frontliners get vaccinated against Covid-19, others eagerly wait their turn to receive the shots that could spell the end of the pandemic.

From April onwards, senior citizens and high risk groups will get the Covid-19 vaccine, followed by adults aged 18 and above beginning May.

But there are some who are hesitant, worrying about the possible side effects of the jab, or adverse events following immunisation (AEFI).

Several insurance companies have started extending coverage for such possible complications, with some offering it for free to existing clients.

A check by Sunday Star showed that some companies are offering cash relief between RM200 and RM500 per day in case a client is hospitalised for up to seven days after being vaccinated.

Another company included the coverage for existing clients for free, with the claimable limit for hospitalisation based on the individual’s medical policy.

Such developments have raised the question of whether it’s necessary for the public to get insured for these possibilities.

While some health experts believe it is merely optional, others say there’s no harm if it is free.

Malaysian Medical Association president Prof Datuk Dr Subramaniam Muniandy says it may be a good idea to get insurance coverage for the side effects since it is available.

“However, any premiums and conditions should be taken into consideration, ” he says.

For those who worry about such side effects, Dr Subramaniam stresses that the benefits of getting the vaccine outweigh the risks by far.

“Side effects, except for severe acute allergies, are usually mild and self-limiting.

“Patients will be advised to wait at the vaccination site for half an hour. Severe allergies, if any, will develop within that time.

“If there is no problem after half an hour, it is safe to go home, ” he says.

However, consultant paediatrician and neonatologist Datuk Dr Musa Mohd Nordin says it is not necessary for the public to get insured for this purpose.

“It should be covered within the general medical insurance policy.

“Besides, anaphylaxis (severe allergic reaction) is a very rare occurrence.

“Other AEFIs are self-limiting. They disappear within one to two days after the injection is given, ” he says.

He adds that Malaysians should feel reassured of the Pfizer-BioNTech vaccine, which has been assessed rigorously by two major regulatory bodies – the United States’ Food and Drug Administration (FDA) and United Kingdom’s Medicines and Healthcare products Regulatory Agency (MHRA).

“The AEFI has been blown out of proportion by many irresponsible quarters determined to block the vaccine roll out by the government.

“The most reassuring note has been recently issued by the MHRA, which was the first regulatory agency in the world to license the use of the Pfizer vaccine in the UK, ” Dr Musa says.

Quoting a publication in the British Medical Journal, he says the UK agency has described the first safety data related to Covid-19 vaccines as “reassuring, ” with most side effects reported being mild and in line with those seen with other types of vaccine.

“It is not much different from the AEFIs of the childhood vaccines.

“About 200 million mRNA vaccines have been used thus far all over the world. And there have been no red flags as far as AEFIs are concerned, ” he explains.

Nevertheless, National Association of Malaysian Life Insurance and Family Takaful Advisors president A.M. Naidu says the public should get more information from insurers if they want to be covered for possible side effects.He says the public is keen for clarification from both the insurers and the government on the details and scope of coverage for Covid-19 treatment.

“Their main concern is the cost of treatment and if it is going to be a “pay first and get reimbursed” practice.

“The public should continue to seek clarification from the insurers on this.

“We advise the public to prioritise insurance coverage at all times, ” Naidu adds.

Currently, the National Covid-19 Immunisation Programme is in its first phase with frontliners being vaccinated.

Beginning April, 9.4 million senior citizens and people in high risk groups will get their shots.

Then, from May this year until Feb 2022, the vaccine will be administered to over 13.7 million people aged 18 and above in Malaysia.

There’s also another layer of protection for the public aside from insurance – the government had agreed to give ex-gratia payments to those who experience serious side effects after receiving the vaccine through a compensation scheme.

Khairy Jamaluddin, the coordinating minister for the immunisation programme, had said details like the amount of payment will be announced soon.

In the meantime, Federation of Malaysian Consumers Associations (Fomca) president Datuk Dr Marimuthu Nadason advises consumers to think twice before taking the insurance coverage for the vaccine’s side effects if they have to top up any payment.

“If you have to pay extra, then there’s no need to get it.

“I have faith in the vaccine and just like other types of vaccines in the past, its side effects will be manageable, ” he says.

Dr Marimuthu says Fomca, through the National Consumer Complaints Centre, has received a high number of complaints involving insurance over the past year.

“Some complaints include failure to cover Covid-19 treatments and lack of information given to customers, ” he adds.

He says Fomca plans to present a memorandum to Bank Negara Malaysia to relook at insurance policies to address various issues.

“We are aiming to have it ready by the middle of March, ” Dr Marimuthu says.

Several Malaysians believe it is good to be protected for free, though.

Businesswoman Emma Shankar, 38, says it is good of some insurance companies to offer additional coverage for the vaccine’s possible side effects without any charges to existing clients.

“I think it’s very necessary for insurance to cover their clients for any ailments, especially Covid-19 since things seem to change rapidly in terms of the disease.

“As an insurance holder, it will give me peace of mind.

“Getting Covid-19 and dealing with its effects is already something stressful and the extra financial burden can really affect a person.

“Hence, kudos to insurance companies offering additional coverage for any complications that can arise from the vaccine, ” she says.

A company executive who wishes to be known only as Chan, 34, says he is glad to know his insurer had offered free coverage for any possible side effects.

“Otherwise, I doubt I would have signed up for any extra protection if I had to pay.

“For me, I have faith in vaccination but I do know of others who are not so convinced.

“Hopefully, this option by the insurance companies will encourage more to get the jabs so that we can form herd immunity successfully, ” he adds.

‘Those with allergies must be assessed by docs before getting jabs’ 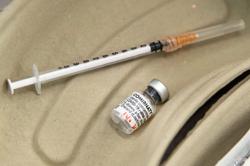 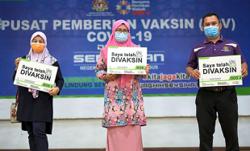