Secrets wrapped in a banana leaf: Origins of Malay kuih

WITH their distinctive flavour and even more unique names, traditional Malay kuih muih are an essential part of the meal during Ramadan. Luckily for us, these delectable desserts and snacks are available throughout the year.

The top layer of the seri muka is a pandan-flavoured custard with a pressed glutinous rice bottom.

According to Universiti Putra Malaysia professor of Malaysian food heritage and culture Shahrim Karim, “Making the top layer is a tedious process, you have to know exactly the right steps with the right ingredients to make it soft and silky.”

The name seri muka refers to the texture of the dish: the “face”, or the top layer, must be smooth, and if done incorrectly could end up rough, with a crater-like surface.

Get the recipe here: http://https://www.kuali.com/recipe/serimuka-pandan/ This is an East Coast kuih that comes in many versions, the most popular being a pandan-flavoured glutinous rice dough covered in palm sugar-drenched shredded coconut. Depending on where you buy it, the dish can also come in rainbow colours or the usual pandan green.

“The name puteri mandi is a metaphor for the method of making the dish. You have to be courteous, as how a princess would gracefully take a bath, ” says Prof Shahrim, explaining that the Malay language uses a lot of analogies and this extends also to the names of food that we eat.

After creating a small round ball out of the glutinous rice dough, one should “softly” make a well in the dough, then stir it “gently” in simmering water. When removing the dough, which will float on the surface of the water when cooked, one should “bathe” it gently in the coconut mixture without ruining its soft and fragile shape. All this must be done delicately. As a princess would do.

Two princesses in a room 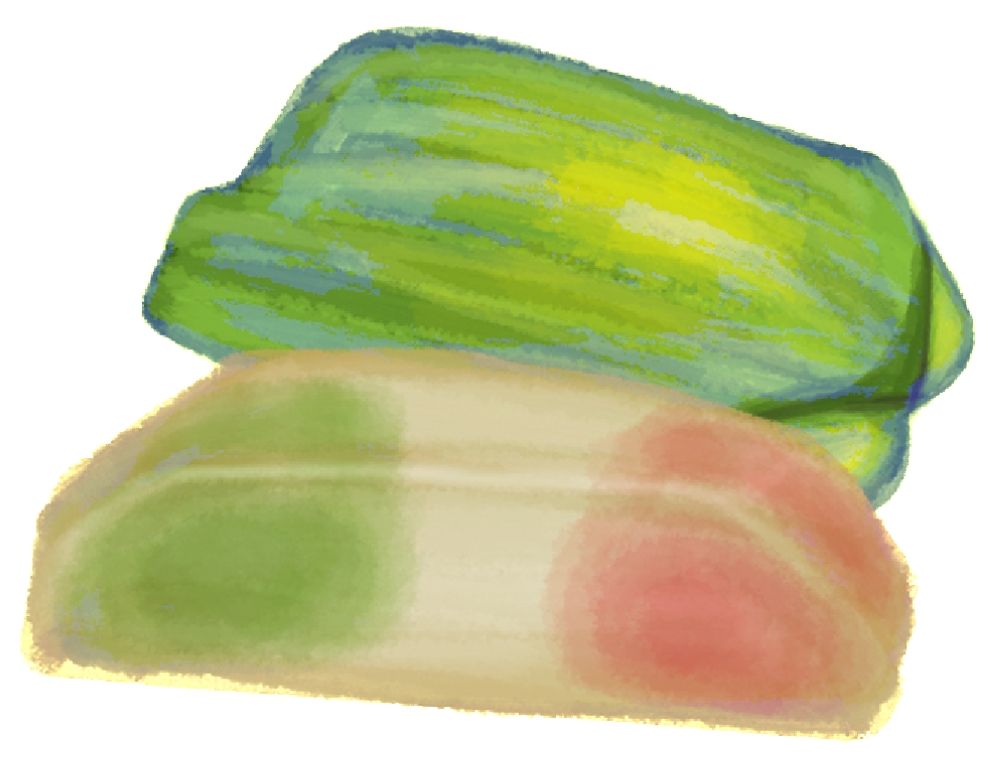 “Like two princesses in a room, this kuih is very soft. The banana leaf is like a room for the two princesses, the glutinous dumplings, sitting in the silky cream of coconut milk, ” says Prof Shahrim. Probably the most unusual name of the lot, lompat tikam would have most people scratching their heads over how its name came to be. While there are myths and rumours, there is sadly no certainty about the origins of its name.

One anecdote takes us hundreds of years back to the Majapahit kingdom, which existed from the 13th to the 16th century. Accor-ding to Prof Shahrim, the tale goes that the Majapahit ruler presented a gift to the Kelantan sultan of the time. The dayang, or court maiden, carrying the dish tripped and fell, causing the surprised Sultan to stagger, leap and accidentally stab the unfortunate lady. This incident eventually led to the naming of the dish, which comprises a pandan-infused jelly-like custard served with santan, palm sugar and glutinous rice. The rice is coloured red in more recent iterations of the dessert.

In another look at lompat tikam etymology, Kelantanese Datin Nik Zaharah shares the story told to her by her elders: “Back then, the green jelly was not cut up as nicely as it is now. They usually stabbed it and so the jelly flops around and ‘lompat’ (jumps).” You can be sure that any delicious pieces that “escape” are quickly eaten!

Get the recipe here: http://https://www.kuali.com/recipe/lompat-tikam-rice-pudding-with-glutinous-rice-coconut-milk-and-gula-melaka/ This kuih has a darker origin story compared with the rest.

“Serabai is also known as kuih mayat (corpse kuih) because back in the day, villagers would make it for kenduri arwah (prayer gatherings for the deceased), ” Prof Shahrim explains.

The serabai is a fermented rice pancake resembling a steamed cake or flapjack and is served with serawa (sweet paste), pengat durian or pengat pisang (pengat is a local custard-like dish made with coconut milk). According to Prof Shahrim, when a death occurs, the family would cook meals for visitors who come to pay their respects. The “serabai” or messy look may refer to family members who appear dishevelled while managing a funeral and a steady stream of guests while in mourning. Its ingredients are similar to the puteri dua sebilik kuih but what sets the badak berendam apart is its size – like a hippopotamus submerged in mud.

“Unlike the puteri mandi, you do not need to boil the badak berendam in water, it can be boiled or steamed straight in the santan and so the process is not as delicate, ” says Prof Shahrim, who adds that one badak would usually be filling enough for one person.