There is an urgent need to increase political literacy among the country’s youths.

This is especially so, following the lowering of the voting age from 21 to 18, and the implementation of automatic voter registration, which will see more than seven million Malaysian youths registered automatically as new voters in the coming 15th general election (GE15).

This represents a 50% increase from the number of registered voters in the previous election.

Most of these youths, including those aged between 21 and 24, would be engaging in the general election for the first time.

Since the implementation of Undi18 and automatic voter registration came into effect last Dec 15, some of these youths had exercised their right to vote – at the Johor state election held on March 12 this year.

However, there have been concerns of high political apathy among Malaysian youths.

Based on Merdeka Center’s National Youth Survey 2021, 66% of respondents aged between 18 and 30 believed that public officials and politicians “do not care” about what they think.

Furthermore, 70% of respondents said they were uninterested in information related to politics.

And 78% felt that politics and the government seem to be complicated and that they “can’t really understand what’s going on”.

In a message delivered in conjunction with the 2022 National Youth Day on May 15, Prime Minister Datuk Seri Ismail Sabri Yaakob expressed hope that the youths will be more knowledgeable and concerned about the parliamentary democracy system and their role as young voters.

The Higher Education Ministry is doing its part in increasing political literacy among students.

Its minister Datuk Seri Dr Noraini Ahmad, in a statement on Jan 27, said the ministry is collaborating with other government departments and agencies to raise students’ awareness (of political matters) as they prepare to become voters.

“Based on a study the ministry conducted to assess varsity students’ political literacy last year, we found that their appreciation of existing policies and Acts can be improved,” she said in the statement.

According to Noraini, more than 450,000 students in higher education institutions (HEIs) are aged between 18 and 20, which means they will be eligible to vote and have a say in the outcome of GE15.

She said the ministry has a role to play in inculcating the correct understanding of the country’s political landscape among the group, which makes up about 38% of the country’s 1.2 million students in HEIs.

One of the ways tertiary students have been empowered in this regard is their running of campus elections independently, with Universiti Malaya (UM) being the first public university in Malaysia to introduce it in 2019.

Campus elections – the mechanisms of which mirror those of the general elections – are conducted at all public universities yearly to select student leaders.

It is a platform for the entire student body to increase their awareness of their individual rights, the importance of voting, how the electoral system works, and how to vote wisely, among others.

It is also an avenue for student leaders to learn to draw up manifestos and campaign to win the students’ mandate in representing them in decision-making on policies and regulations that would impact them.In anticipation of GE15, it is clear that more needs to be done to bring youth voters up to speed on not only the technicalities of elections, but also their individual rights and responsibilities as citizens of the country.

THE DISCOURSE : Public undergrads in the hot seat 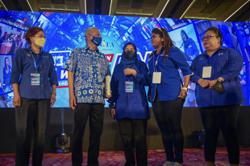 Education Ministry to announce actual post-SPM, dropout data
Centralised reporting system among education transformation elements introduced by govt
Study, work and live
Portal to tackle bullying in schools
Fortune favours the bold
Sweet success
UTAR looks ahead with STEM focus
Growing a ‘garden of life’
KPMG teams up with edu providers to empower change
The dilemma of where to study