Study in safety: Students should be able to go to school without feeling insecure or anxious about harassment or bullying. — File photo

AIN Husniza Saiful Nizam’s cyber battle-cry to #MakeSchoolASaferPlace (see timeline) led to a nationwide online movement with many young Malaysians stepping out of the shadows to share their stories of sexual violations in schools.

Activist Puteri Nuraaina Balqis, 26, who started @savetheschoolsmy on Instagram soon after Ain Husniza’s story broke last month, saw hundreds of current and former students sharing their stories of being harassed.Despite a lack of quantitative data, Women:girls executive director Izza Izelan said there is “clearly a problem” that needs to be dealt with urgently. A good start, she said, would be to have a single empowered body or agency that students can report such cases to.

“Victims are reluctant to go to authorities because they have trust issues – they don’t think they will be believed or that action would be taken.”

Women:girls is a cause-driven, non-govermental organisation (NGO) that was founded to help women realise their potential as role models and teach children to become agents of change.

Izza, who used to teach in a secondary school in Shah Alam, said she has seen how the system works against the student victim.

From the start of their schooling years, teachers hold an authoritarian position over students, she told StarEdu.

“We can nip this in the bud if we train teachers well when they are at the teachers training institutes (IPGs) and universities, ” she said, adding that a clear and comprehensive code of ethics must be given to these future educators.

Izza said there is an existing code of ethics but it is “very generic and outdated.”

She suggested that students who are part of the Peer Mentor Society (Pembimbing Rakan Sebaya) be trained to help their peers as children are more comfortable confiding in their friends in comparison to adults.

“Right now, we do not have a safe system for victims to share or channel their experiences, ” she said while revealing that most of the victims who approach the NGO for help had actually been sexually harassed or exploited years ago.

“You will rarely hear them say it happened last week or the day before, ” she said, adding that most of them do not know that inappropriate behaviour had taken place.

“We should not have to look at statistics to make a move. One incident is already one case too many.”

Monsters Among Us: Youth Advocates founder and president Firzana Redzuan said the first step in solving the problem is acknowledging that it exists.

“Teachers and schools must be sensitised to the terror that the students have to face when they go to school, ” she said, adding that among others, there is the constant anxiety caused by stronger groups who bully them, and the feeling of helplessness when a teacher trivialises the issue.

“When a tragedy happens, the school is not subjected to a proper procedure when conducting the investigation.” 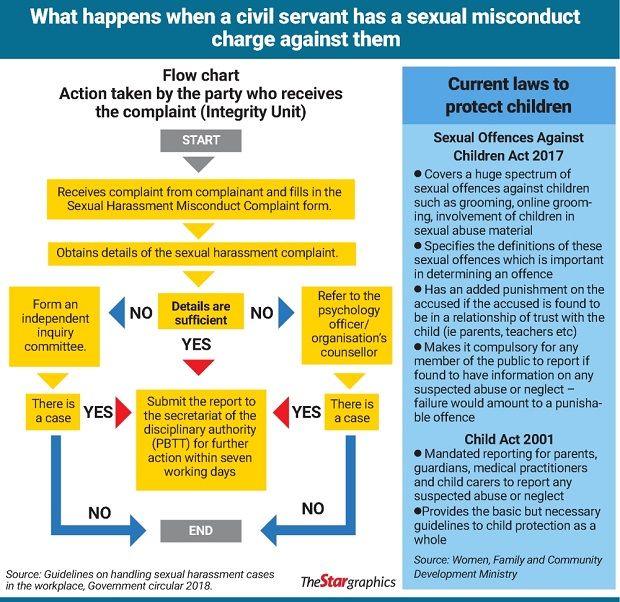 She added students are “forced to accept” that no one will help them as cases often end up being swept under the rug.

“All of these occurrences that we hear on social media are our students’ call for help – because they are not heard at schools, ” she said.

Firzana said teachers could pick up tips that teach them how to react and respond to reports of suspected abuse or harassment.

“Teachers do not need to wait for circulars from the Education Ministry in order to act, ” she said, adding that a strong and comprehensive policy is necessary.

A policy that extensively explains the reaction protocol to reported cases, she said, would protect children as it regulates the relationships between school staff and students.

She said that the community does not make it easy for a victim to speak up.

Oftentimes, she said the victim is told: “If it happened, make a report”.

This is done without the realisation of the trauma the victim would have to undergo to revisit that memory.

“Society puts such high expectations on victims to defend themselves.

“It is scary that our society questions the victim over and over again on whether a sexual misconduct actually occurred.

“But the moment the alleged perpetrator declares that they did not do it, society is satisfied and the questions end, ” said Firzana.

If everyone thinks sexual abuse survivors are shedding crocodile tears and crying wolf, schools would be a terrifying place for victims, she said.

Referring to the case of Ain Husniza which was highlighted in both local and foreign media reports, Firzana said the issue boils down to society’s inability to recognise rape culture as valid harm.

Parent Action Group for Education (PAGE) president Datin Noor Azimah Abdul Rahim said it is time that those in power recognise that there is a problem and offer a channel for students to be heard and matters to be resolved.

“There needs to be political willpower as the problem will not go away. (Recent) statistics show an average of 2,500 rape cases, 210 sexual harassment cases, 2,250 molestation cases and 300 incest cases annually, ” she said, adding that there could be more as many go unreported during the pandemic.

She urged parents to insist on an investigation to ensure accountability. And teachers, she said, should be trained to gently handle the delicate situations.

Childline Foundation Malaysia director Datin P.H. Wong said if schools followed the Safe School Policy and Child Protection Policy – both by the Education Ministry – issues such as sexual harassment and bullying would not be happening.

“If all teachers and school staff sign the policies, they will be aware of the consequences, ” she said, adding that gender equality and mutual respect must be taught at kindergarten.

“There should not be any differences between boys and girls. It should be an equal plate, right from the very start.”

This would mean a change in social norms, where girls are seen as the weaker sex and sexual jokes are tolerated when it comes from boys, she said.

Wong said schools, even though they have counselling services, do not have other avenues that encourage students to speak up if they feel something is amiss.

“Children need a safe space to talk about anything that troubles them, ” she said, adding that based on the NGO’s interactions with children, the majority said they would not approach their school counsellors if they faced problems.

This shows that they do not trust the system or their own teachers, she said.

Wong said children do not believe that the counsellors are going to protect them because they think they will be fodder for gossip among other staff members.

“Then there is the stigma of seeing a counsellor and these children fear getting bullied because they have had a need to meet with the counsellor.

“In Malaysia, it is not the norm to see a counsellor unlike in the United States, ” she added.

Wong urged all educational institutions to have a policy on sexual abuse and exploitation that clearly lists the protocols for an internal inquiry.

“A whistleblower policy is also needed so the victim isn’t victimised, ” she added.

The Malaysia Bar also urged the Education Ministry to implement comprehensive and structural reforms to ensure that school administrators, teachers and staff are sufficiently trained to deal with children.

Its president A. G. Kalidas said immediate disciplinary actions should be meted out towards rogue school staff to ensure children are safe and treated with the respect that they rightly deserve.

“There needs to be more constructive and urgent actions taken to tackle incidents of unlawful interference with regard to the rights of children in schools and institutions, ” he said.

Kalidas added that a zero-tolerance policy towards bullying and harassment must be adopted in schools.

“Schools ought to be a safe haven for their students, and the staff must refrain from making comments that can be construed as ‘victim-blaming’ – which suggests that the victim rather than the perpetrator should bear responsibility for mistreatment, ” he said in a statement on May 12.

Kalidas added that there may be other unreported cases due to fear of repercussions, including the anguish that they might not be believed, which would prevent them from coming forward with their complaints.

Noting that Malaysia has enough legislation in place for sexual offences, Firzana however, said there isn’t one for sexual harassment.

“This can only be done if the relevant ministries are willing to invest in capacity training, researching and building safer standard operating procedures (SOPs) to handle cases like these.”

“Any allegation of rape, rape threat and sexual harassment must be investigated immediately.

“Action must be taken against the perpetrator. The impact of these crimes can be devastating to the victim and their family.

“Issues pertaining to rape, rape threats and sexual harassment are very sensitive and must be cautiously and professionally addressed especially by educators, ” he said in a letter to StarEdu.

The public, especially students, he said should be thought from young about the seriousness of such crimes.

“But teachers, who play an important role in educating their students, should be properly trained before they are permitted to talk about such complex, sensitive and serious issues to their students.

“We should carry out more educational and public awareness programmes including in schools, ” he said, adding that school administrators must actively engage with the relevant NGOs to better educate their students and teachers.

He also called on the government to take sexual harassment and sexual misconduct seriously.

Sexual harassment, he explained, relates to a sexual nature and it is unwelcomed or unwanted by the recipient.

The act includes a range of actions from mild transgressions to sexual abuse, sexual assault and rape.

“Sexual harassment can occur anywhere including the home and the school.

“And it can happen to anyone regardless of gender.”

The absence of specific legislation to deal with sexual harassment means that such cases are dealt with under existing regulations such as the Penal Code (Act 574), the Employment Act 1955 (Act 265), Industrial Relations Act 1967 (Act 177), Occupational Safety and Health Act 1994 (Act 514), Code of Conduct of the Public Officers (Conduct and Discipline) Regulations 1993 and the Government’s circular Guidelines for Handling Sexual Harassment in the Workplace No. 5,2018.

“It creates in-house mechanisms to deal with the issue.

“It provides victims with timely and meaningful access to legal redress.

“The proposed Bill also focuses on the creations of special tribunals, procedures, remedies, counselling, and protection against retaliation and victimisation for both victims and witness in sexual harassment cases, ” he said.

He advocates for the Bill be tabled and passed as soon as possible.

Tears in our safety net