DON’T judge a book by its cover is applicable in many occasions, as appearances are not always as what they seem to be. A successful person may not have been born with a silver spoon in his mouth or have had extra privileges to start out with. Some made it with sheer determination, grit and of course, a strong educational foundation that set the tone for future success. Such is the journey to success for Happy Lee Yan Lung.

At first glance, Lee may seem to have his whole life sorted – he graduated top of his class and was named valedictorian of his graduating batch at National Louis University in Chicago, US.

He secured a job as an advertising operations manager at Work4 Labs, a French company specialising in social and mobile recruiting solutions. Lee (in black t-shirt) pitching HydroHomies to a potential investor.

Pursuing his own entrepreneurial dreams, he also co-founded HydroHomies, a company that delivers high-quality fresh produce to consumers all year long via modern farming techniques.

Unknown to many, however, Lee did not have a great head start in life.

He was initially an underachieving student, scoring mostly Ds and Es. Having faced several challenges, he opted for a new beginning and transferred secondary schools. Due to his outgoing personality, he was awarded the Traits Personality Award twice, served as the Library Club president and was vice president of the Taekwondo Club and Chinese Society respectively.

After obtaining average SPM results, he enrolled into INTI International College Subang to pursue its American University Programme and devoted himself to his studies.

“There was one particular week when I had two midterm exams, two group projects and one presentation. Going through that week taught me so much about perseverance, resilience, and work ethics, ” Lee recalls. Being away from his comfort zone does not hinder Happy from doing what he enjoys most – volunteering for causes such as this event for the National Restaurant Association in Chicago.

During his second year in college, he realised that he needed to gain practical experiences alongside his academic endeavours. Volunteering at the Junior World Entrepreneurial Forum (JWEF) organised on campus turned out to be life changing, as he met Jolene Sim, an inspiring entrepreneur who took him under her wing and coached him on digital marketing strategies.

He explained, “After joining her company, I learnt to juggle between work and studies and gained so much from the experience. I worked with brands such as Universal Music to execute social media strategies and analyse their outcomes. I also learnt how to remain calm under pressure.” A group photo of the event that changed Lee’s life – the Junior World Entrepreneurial Forum (JWEF) at INTI. Lee is second from left, standing on the fourth row in a white t-shirt.

Furthering his studies to the US seemed like a dream come true. Lee was initially rejected on his first application as an exchange student. INTI’s University Placement Office head Terrie Teoh saw his determination and connected him with Kendall College who were visiting at the time. The conversation enabled him to become an exchange student at Kendall College, and then to transfer as a full-time student to National Louis University.

Graduating top of his class should have made it easier to secure a job, but it took him over 500 applications and over 230 rejections before he managed to land a job with Work4 Labs. 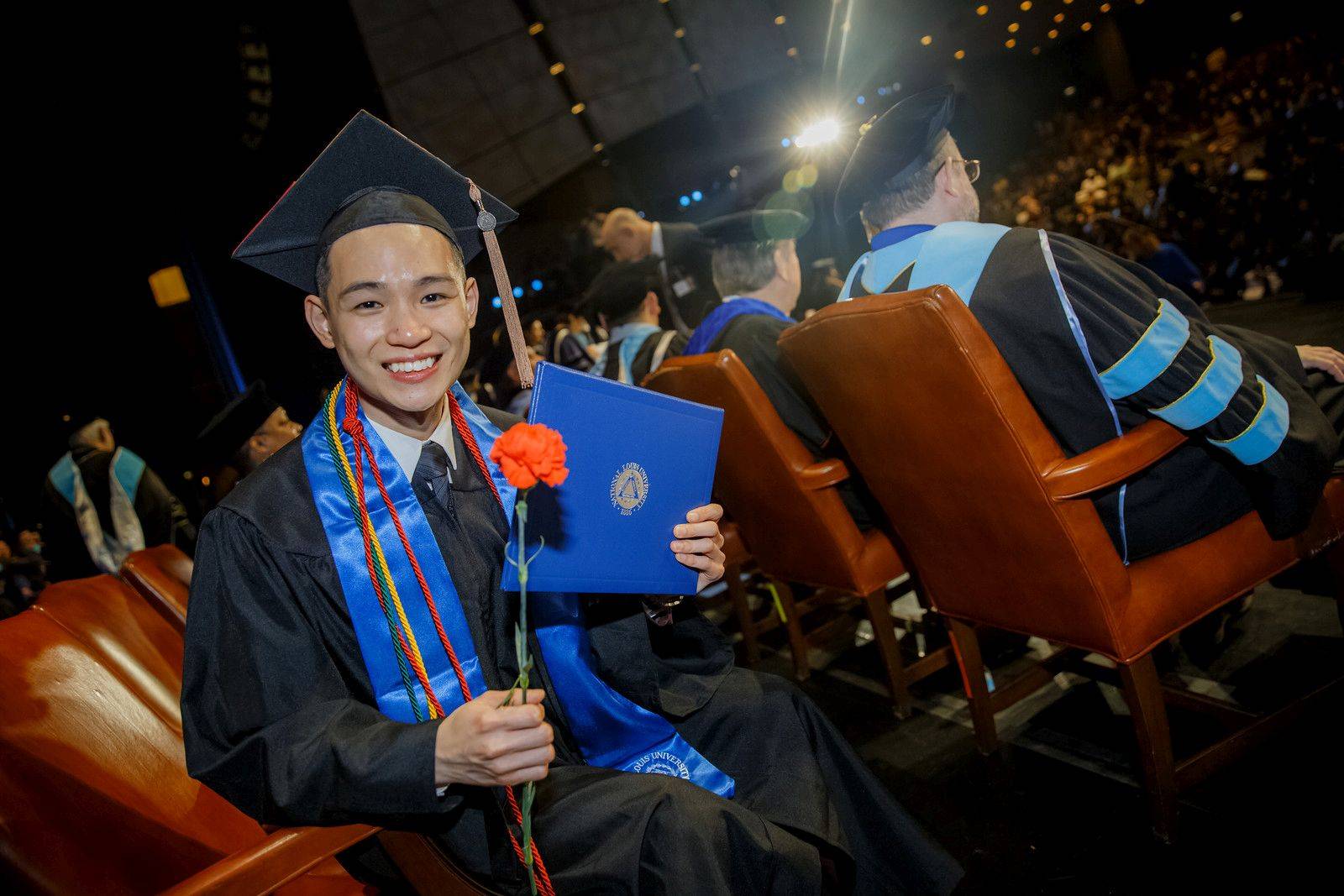 Lee is proof that hard work is always worth the effort.

Lee concludes, “When I completed my SPM, I had no expectations. Thanks to INTI and Kendall College, I was able to further my studies to the US. In the process, I have met so many inspiring people I can call my friends and mentors for the rest of my life. I would say coming to INTI and then migrating to the US made me realise my purpose and calling, and for that, I am so grateful.”