Full scholarships with no strings attached

OUTSTANDING Malaysians are invited to apply for a fully-funded scholarship to do their bachelor’s degree at Magdalene College, University of Cambridge.

Launched this month, the YH2 Capital Scholarship sponsored by the company’s founders and co-CEOs, Tai Yen How and Barbara Yu, is for those who would not otherwise have the means to study at the prestigious academic institution.

“We’ve committed to funding two scholars through their bachelor’s degree journey in the United Kingdom. Per scholar, the award will cover up to £200,000 (RM1.03mil),” said Tai, a Johorean and Asean Scholar who studied in Singapore before earning his Economics degree at Harvard University.

The aim of the scholarship is to spark the imagination of Malaysians so that they aren’t afraid to chase their dreams and study whatever excites them. Tai: We want to give them the power to dream and think about what they really want to do without worrying about funding.

“It’s not just about us giving money. Much thought went into how we could create an opportunity for someone who would not otherwise have had the chance to fulfil his or her full potential,” said Yu, a Jardine Scholar and recipient of the N. Diaz Scholarship for Law and Norton Rose Prize for Commercial Law.

The Magdalene alumna graduated from Cambridge with a double first-class honours in Law.

Sharing their passion of nurturing talents who can contribute to a better tomorrow, the couple explain why they’re giving back.

> Why is the award only for Malaysians?

Tai: Two years ago, a group of Malaysian students approached us asking about scholarships. That was when it dawned on me that we could make a real difference. Unlike in Singapore and Hong Kong where there are plenty of public and private funding, I don’t think there are any full scholarships for Malaysians to attend Cambridge. It was the same when I was in school. We thought of many ways to help including offering bursaries and grants but we decided on a full scholarship with no strings attached because we felt it would have the most impact. This scholarship ties in with our company’s philosophy of making long-term investments. We spot and discover companies with great potential and hopefully in 10 years time they will grow 10 times in value. That’s the same objective we have with this scholarship. If you want something – whether it’s strong friendships, good health or grooming talents who can change society, you have to invest. We know there are many capable Malaysians who can hold their own against anyone, anywhere. Last year, 37 Malaysians got accepted into Cambridge. We believe there are many more Malaysians who have the ability to get in and do well but they don’t apply because they think it’s such a remote dream. So we want to uncover the hidden gems and help them achieve what they never thought was possible. We want to give them the power to dream and think about what they really want to do without worrying about funding. This scholarship is born out of personal connections – me with Malaysia, and Barbara with Magdalene College. We’re not discriminating against anyone but we want to give those who would otherwise not have the means to go Cambridge, a chance.

Yu: We benefited tremendously from having scholarships. We worked hard but we’re still very lucky to be where we are now. It’s time to give back and we feel that this is a good way to do it.

Tai: It’s the only way to give someone the freedom to follow their dreams. We can’t imagine doing it any other way. Some Malaysian students were telling me recently how passionate they are about societal and political issues. But when it comes to choosing a degree course, they say those areas don’t make money. They cannot reconcile pursuing something they love with the practicalities of life.

Yu: I’ve always had the desire to get out of Hong Kong and see the world but my family did not have the means to travel abroad. I got to Cambridge on a bond-free Jardine Scholarship so I was free to do whatever I wanted after graduating and I worked in New York. That has been a hugely transformative experience for me. Malaysian students often tell us: “I want to study ABD but my parents want me to do DEF so that I’ll get a job”. My advice is always to do what you want because when you are good at it, the job will take care of itself. If you do what your parents want, you may not do well because you aren’t motivated. But they still have that sense of fear and insecurity. Hopefully this scholarship will take away a large part of that pressure when they’re deciding what to study.

> You say students can study anything they want yet certain subjects are excluded.

Tai: Some subjects like medicine, veterinary medicine and architecture are excluded because these have small quotas for international students. We also didn’t include engineering because there are lots of scholarships for that but less for subjects like philosophy.

Engineering is very popular now because people think technology is the future. But our scholarship’s aim is for students to look as what’s meaningful to them. We’re not trying to replace other scholarships. We’re looking to fill a gap and deliver the biggest impact possible.

We don’t just want to train another engineer for some big company to hire.

Who’s to say Malaysia can’t have a Nobel Prize historian or scientist?

> What kind of scholars are you looking for?

Tai: The next Nobel Prize winner (laughs). We’re intentionally vague about the term ‘outstanding’ because we don’t believe in having a checklist for leadership role, sports and so on.

If you play piano but don’t enjoy it, then it has nothing to do with musical appreciation. But if you’ve never spent a day in your life learning piano, yet you love music in a deep, philosophical way, it counts for more. Similarly, you don’t need a background in creative writing to appreciate poetry. Having interests that you’re really passionate about is more important than any checklist.

Don’t just do something because it’ll be easy to get a job. Have a clear, holistic idea of who you are, what you want to pursue and the role you want to play in society. We’re here to lend a hand if you have the passion, motivation and intellect.

Yu: To be considered, the scholarship applicant must be someone who has gotten a conditional offer to get into Cambridge so we already know this person has academic rigour. What we’re looking for are personal qualities – will this person be a thought leader, for example.

We’re looking at potential rather than what he or she is today. And whether you have potential boils down to whether you have that intrinsic personal quality to take you far. Thought leaders can come in many forms – you don’t have to be an extrovert. Some are very quiet yet they inspire through papers and lectures. Don’t feel like you have to boost your application by claiming to do this and that just to check a box. We want to see your authentic self and how that potential can be enhanced at Magdalene.

> Is financial background a consideration?

Tai: In Singapore or Hong Kong, a middle-income family that saves for 20 years, can still afford Cambridge for their children. But in Malaysia, even some upper-middle income families struggle to do the same. I met a scholar whose father is a doctor but he has three siblings. He needed a scholarship otherwise his siblings would not have the same opportunity to study abroad. So this scholarship only excludes the wealthy.

Yu: We’ll look at the household income and assets because some may not have high income but they have legacy wealth. 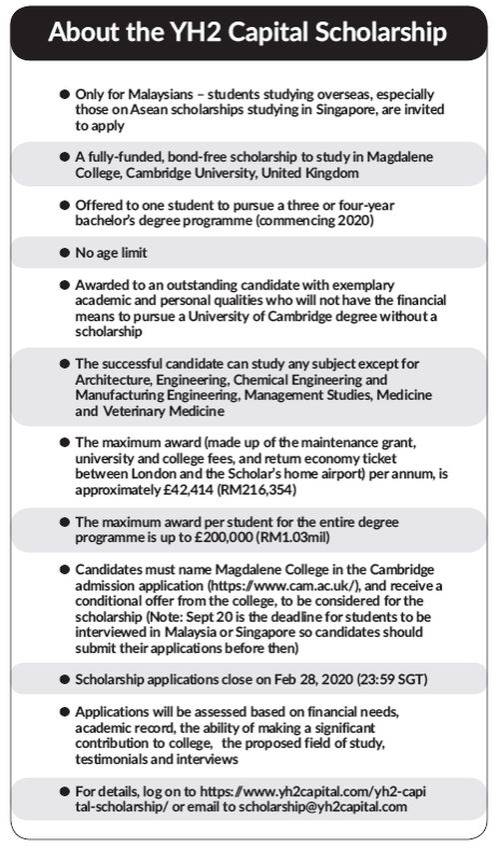 The magic of Magdalene 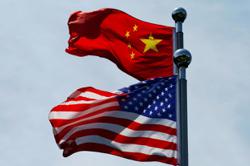 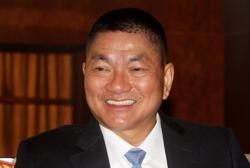