Some of the latest e-cig and vape devices are cheap, as small as your thumb and can even be worn as a watch. Tobacco control experts say awareness among parents and teachers are crucial in keeping this new addiction out of schools.

The smoking cessation specialist says there’s a chance that students using ECV will be exposed to other drugs.

“And it’s likely they’ll face the same problems – like poor grades – as students who smoke.”

Dr Amer Siddiq was commenting on findings published in the July edition of the Journal of Criminal Justice.

Dr Nur Amani@Natasha Ahmad Tajuddin, the lead of the NARCC smoking prevention programme in schools, says when the use of ECV is related to crimes like theft, violence, fighting, bullying, and running away from home, more effort is needed to curb the habit.

“Parents must realise that ECV has negative health, mental, economic and academic impact on youths.”

Four years ago, ECV use among students was less than 3% because the devices were too pricey for most teenagers, Assoc Prof Dr Anne Yee notes.

According to the Tobacco and E-cigarette Survey among Malaysian Adolescents 2016 (Tecma), a whopping 36.9% of students start on the devices between the ages of 14 and 15, and now, we’re seeing a spike in teenage use.

“Sellers are going all out to push the product to teens by making it cheaper and more accessible.

“Many even give it free to attract young customers. Drug pushers use the same tactic to get people hooked so that they keep coming back.”

These days, huge, eye-catching banners adorn night markets with traders openly displaying their wares. Clearly, the colourful e-liquid bottles with fancy names were designed for kids, teenagers and women, she says. These are groups that may never smoke yet we’re turning them into ECV users.

“If sellers are targeting adult smokers who want to quit, they wouldn’t need gimmicks. Why make such fancy designs?”

Dr Nur Amani says a recent study reported that 22% of children aged between 11 and 15 in England, use ECV compared to 18% who start smoking.

“This is because ECV ads are appealing. Here we have celebrities promoting ECV on social media to entice kids.”

Dr Amer Siddiq says more needs to be done to prevent a new generation of nicotine addicts from emerging.

“ECV isn’t safe. The devices could burn and the e-liquids could be adulterated.”

While studies have shown that children and adolescents see ECV as cool, pleasurable and fun to use, Dr Nur Amani says there’s a pattern of kids from lower socio-economic income groups being targeted by unscrupulous sellers.

National Union of the Teaching Profession (NUTP) secretary-general Harry Tan says teachers nationwide are noticing a rise in ECV use among girls.

“This is scary because with cigarettes, it was mostly just the boys. But these devices are popular among both boys and girls.”

Dr Yee is worried because nicotine is being touted as a way to lose weight. It’s like what drug pushers tell women about meth.

As it is, more young girls are experimenting with e-cigs as compared to cigarettes. Society still has a negative perception of women who smoke. But with ECV, the message is that even ‘‘good girls’’ use it because it’s fashionable and can help you lose weight, adds Dr Yee.

In December last year, The Star highlighted how ECV and e-liquids were promoted as weight management aids.

“Even e-liquids that claim to be nicotine-free contain the drug. And you’ll never know for sure how much nicotine is inside. It could be equal to 20 cigarettes.

“A nicotine high lasts for less than two hours before the craving starts. So getting youngsters hooked on ECV is a business tactic, ” explains Dr Yee.

If your kids are turning to cigarettes, ECV or drugs, it could be because they’re bored or have no one to turn to, she says, adding that children who feel a sense of belonging in the family don’t need these harmful distractions.

Dr Yee says teenagers are much more susceptible to addiction compared to adults. Some even start to have nicotine cravings after just one try.

“The teenage brain has yet to mature. That’s why adolescents are more impulsive, emotional and susceptible to advertisements aimed at influencing their behaviour.”

Parents whose children are already smoking aren’t helping by getting them an ECV. While it’s better than a tobacco cigarette, ECV is harmful for non-smokers.

When inhaled, tiny chemical particles in the e-liquids can enter the bloodstream and cause long-term harm.

Those between the ages of 10 and 18, adds Dr Nur Amani, are especially vulnerable to addiction.

ECV use among varsity students is also worrying, says Dr Amer Siddiq, who was among the researches behind The use of e-cigarettes among university students in Malaysia journal paper published in December.

The study, funded by the Education Ministry, involved 1, 302 students in six Malaysian varsities.

“Over 40% of students smoke and use ECV. This means that ECV has not helped them quit smoking, ” he says, adding that some users even experienced adverse effects like dizziness, coughs and headaches.

The Education Ministry recently announced that it would intensify awareness campaigns after claims of ECV being freely distributed among students, and photos of youths vaping, went viral.

Calling on parents and society to stop students from bringing the devices to schools, the ministry’s director-general Datuk Dr Amin Senin notes that ECV has become the norm these days – becoming more sophisticated and difficult to distinguish from other electronic gadgets.

Welcoming the ministry’s move, Dr Nur Amani feels it’s important to get tobacco cessation experts onboard to work with teachers.

More awareness campaigns need to be conducted by health scientists, educationists, politicians and non-governmental organisations, to show that ECV use is not “normal behaviour”.

“The children themselves can then act as ‘peer experts’. The impact is greater when the message is shared by those of the same age group.”

Campaigns can be effective if we target parents and teachers, says Dr Yee.

With children and adolescents, the more you say no, the more they will want to try it, she says, adding that parents shouldn’t over-react if they find their child smoking, using ECV or taking drugs.

“It’s not the end of the world. Be an ally to your children instead of acting like the police.”

She suggests talking to children about the dangers out there instead of sweeping things under the carpet.

“Make them realise that sellers only want to make money by getting youths hooked on an addictive habit whether it’s nicotine or drugs.”

The Health and Education Ministries are already working together on the Kotak (Kesihatan Oral Tanpa Asap Rokok) programme to highlight the harms of cigarettes and its related products, says Dr Amer Siddiq.

But with the introduction of newer ECV models, there’s a need to raise awareness among the adults.

Citing some pod-and-USB-like devices as examples, he says these have very high nicotine content but most parents and teachers don’t know about them.

Recently, children were mimicking vaping because of what they see on social media, Dr Amer Siddiq says in reference to the crackdown on Ghost Smoke – a candy consumed by sucking on a straw to produce a vapour-like effect.

“The Kotak programme must be enhanced to cover ECV and its dangers especially the impact on young developing brains.”

NUTP’s Tan says most teachers are in a cocoon when it comes to ECV.

“We need to expose teachers to this new threat so that they know what to look out for.

“And teachers must be given more authority. Since we cannot cane and are vulnerable to lawsuits, we want legislation that compels parents of problematic students to come to school and be responsible for their kids’ behaviour.”

UM, says Dr Nur Amani, has been conducting educational and advocacy programmes in schools through its No-Cotine Club and Community and Sustainability Centre (UMCARES).

Trained students go to colleges and schools to carry out activities that de-normalise smoking and vaping, she says.

“Soon we’ll be approaching 80 partner schools to tell our children that EVC is not just ‘evaporated water’.

“The effects are harmful and it’s haram for Muslims. Hopefully when they go home, they’ll share the message with their parents.”

ECV will be among the hot topics at the upcoming KL Nicotine Addiction International Conference (KLNAC) 2020, says its organising chairman Dr Amer Siddiq.

As the country moves towards realising the National Strategic Plan to make Malaysia smoke-free by 2045, it’s crucial to look at all forms of technology that can prevent the uptake of cigarettes, he says.

“We’ve decided on the theme ‘Mission IR 4.0: Redesign Tobacco Control’ because of the emergence of various disruptive technologies that can either assist quitting, prevent youths from starting the habit, or attract people to smoking.

“ECV was initially touted as a way to help smokers quit but we’ve seen how Juul has ended up enticing youths to take it up instead.”

UM, he says, is already using data and technology in its tobacco control efforts.

The varsity’s dental group is working on an app for school children to prevent initiation to smoking.

And, Dr Yee is collecting data to match smokers with cessation apps that are right for them.

“We’ve thousands of smoking cessation apps yet the success rate is only 25%. Each app caters to specific personalities so we’re trying to match smokers with apps that cater to their preferences. This will ensure a higher success rate.” 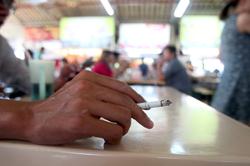 Higher Education Ministry seeking more volunteers for PPVs at education institutions
DON'T MISS IT
Hoping for a better future
Social etiquette: A must even online
THE RISE OF ROBOTS
Deaf UM student earns PhD
UMK LAB TO IGNITE INNOVATION
Waiting to be doctors
My first year as a medical student
UPSR scrapped: What now, parents ask