Public varsities to get tough on plagiarism

Stern action would be taken against anyone caught violating academic rules and ethics, she said, referring to Tan Sri Rafidah Aziz’s remarks that it was better for academicians to not meet university KPIs than to ride on a student’s work without any form of contribution.

Rafidah, a former international trade and industry minister, had said this at a forum on June 29 when an audience member asked about academics who allegedly included their names on their students’ work as they had to meet high KPIs.

Prof Nor Aieni said in a statement, that any report made to the management of the university would be thoroughly investigated according to rules and procedures.

“Academicians should be well aware of rules and regulations which are enforced in universities such as Academic Ethics Code, Research and Innovation Policy and Research Ethics,” said Prof Nor Aieni, who is also the vice-chancellor of Universiti Malaysia Terengganu. She added that these rules and regulations were guidelines for academicians on the ethics of research and publications, including those concerning supervisor-student journal publications.

“Our Integrity Unit is responsible for handling all such cases,” she said.

She also said that the university had many channels that could be accessed by staff, students and the public to lodge complaints.

This includes the U-Response system, which is a transparent system to allow freedom of expression among students, staff and the public.

Universiti Tun Hussein Onn Malaysia vice-chancellor Prof Dr Wahid Razzaly said they would take stern action against anyone caught violating academic integrity, including misusing grants, and that channels were open for anyone to air their grouses.

Universiti Utara Malaysia vice-chancellor Prof Dr Ahmad Bashawir Abdul Ghani said: “Any case pertaining to academic integrity that affects the reputation and image of the university will be referred to the disciplinary unit as well as to an anti-corruption committee.” 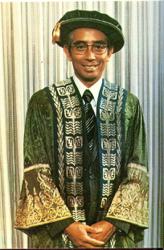 An academic and agriculture icon