No home, no life

About 500 students and 50 teachers of SMJK Choong Hua in Bidor, Perak, took part in the global strike in May.

SHE was an unknown 15-year-old who skipped school to stage a protest for the climate, outside the Swedish parliament building in August last year.

Armed with a simple hand-painted banner that had “skolstrejk för klimatet” (school strike for the climate) emblazoned across, Greta Thunberg sat in solidarity on the cold cobblestones outside the parliament building on the first day of the protest.

Fast forward to the present, Thunberg is now the poster child of determination, inspiration and positive action on combating climate change across the world.

Her “skolstrejk för klimatet” banner has been translated into dozens of languages and her “voice” has permeated across the world, including to far corners of Malaysia.

Recently, SMJK Choong Hua in Bidor, Perak, became part of Thunberg’s “Fridays For Future” movement, which refers to how a strike is conducted every Friday to protest the lack of effective climate legislation at the governmental level.

The movement, started by Thunberg, is one of the biggest environmental protests the world has ever seen with over 1.6 million people from at least 125 countries taking part in the first global strike on March 15.

School principal Margaret Lim Pei Tee caught wind of the first climate strike and wanted to get the school in on the action to show support for the environment and raise awareness of climate issues among students and teachers. “Hence, we joined in on the second edition of the global strike on May 24 dubbed Strike 2. It was also part of the school’s Highly Immersive Programme (HIP).

“About 500 students and 50 teachers of the school took part in this meaningful event, mooted by Lim Lin Sun, a school improvement specialist coach (SISC+) from the Batang Padang district education office.

“A week before the event, we pasted some random information about Thunberg around the school to spark students’ curiosity about the Swede environmental activist. This led them to do their own research about Thunberg and climate change,” said Lim.

SMJK Choong Hua is no stranger to green activities. Besides banning the use of plastic straws in its canteen from April onwards, regular recycling activities are carried out while its canteen operators collects used oil for recycling purposes.

On the day of the strike, students worked together in groups to hand-paint banners with slogans using cloths and recycled cardboard materials.

Students then marched around the school field holding their completed banners and posters, while shouting slogans to show their protest against climate change.

Some creative slogans coined by students included “Destroy My Asset, Not the Earth”, “No Home, No Life” and “You’ll die of Ageing but I’ll die of Climate Change”.

Noting that students and teachers enjoyed the activity, Lim said the main objective was to instil awareness in students that they have the power and platform to voice their concerns for climate change.

“As the future of the world, the young generation is the beacon of hope to create a better world to live in,” she said, adding that students were able to cultivate leadership qualities, teamwork and creativity through the event. 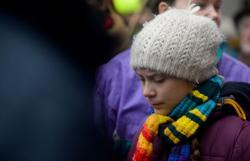 Climate activist Greta Thunberg back to school in Sweden