Is MUET the right assessment?

THE dust has yet to settle on the Education Ministry directive instructing English option teachers to sit for the Malaysian University English Test (MUET).

Teachers, who are key to the successful implementation of the programmes aimed at improving English, are unhappy with the directive. And, they’ve taken to social media to question the rationale of it.

A secondary English option teacher who only wanted to be known as Chan, thinks it is not the “right instrument” to gauge the proficiency and ability of teachers to teach the language.

Having taught for two decades, she says it impractical and unnecessary, to have over 20,000 English teachers sit for the exam by December.

“It’s better to let us improve ourselves through in service training (latihan dalam perkhidmatan, or LADAP) that caters to our needs.

“Allow us to attend conferences and conventions so English teachers can pool our resources and help each other.

“Even a mentor-mentee programme within the school, helps. This MUET idea is just a knee jerk reaction that has no long term benefit,” she says.

The Selangor teacher questions the need for English teachers to sit for the test, instead of going through upgrading exercises such as attending conferences and seminars.

Such exercises, she says, are more beneficial than tests. What happens to teachers who don’t do well in the test, she asks. 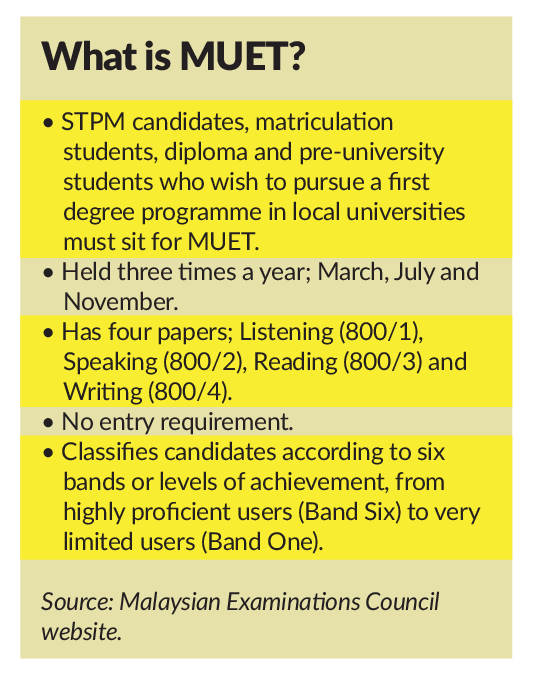 “If teachers who do not fare well are removed, who will take over the lessons? And if they are not removed, then why bother testing?

“Will there be interventions to help teachers pass?”

She feels the move will discourage teachers, who are already bogged down with many changes in the system, from teaching English.

While it is unlikely that the ministry will budge, a meeting with stakeholders was held to discuss improving the quality of English language education in the country.

Education director-­general Datuk Dr Amin Senin says the ministry was willing to listen to the voices of teachers.

A closed-door meeting with the National Union of the Teaching Profession (NUTP), Sarawak Teachers’ Union and the Sabah Government Teachers Union (KGKS) was held in Putrajaya last week.

“We received constructive feedback and input from the unions.

“Various aspects were discussed during the meeting, including the rationale behind the implementation of the English Language Education Reform in Malaysia: The Roadmap 2015-2025,” says Dr Amin.

The English option teacher from a primary school in Selangor says qualified English teachers have degrees, masters and some even a PhD in the language.

“Why should they revert to MUET?

“I wouldn’t mind other international standard tests but (with MUET), even the competency of invigilators and examiners are questionable.

“Who are they? Are they qualified?” he asks.

He, however, supports the need to gauge the proficiency of language teachers.

“I believe in always upgrading oneself but please use another assessment test, not MUET.”

Faridah Kassim from SMK Aman Jaya also disagrees with the directive. She teaches English to Forms Four and Five.

Instead of theoretically testing a teacher’s proficiency and competency, she says practical courses and training should instead be provided.

“MUET is a pre-university test. Many English option teachers have much higher qualifications. It’s not a good gauge of proficiency.

“Making us sit for MUET feels like a downgrade.”

According to the Malaysian English Language Teaching Association (Melta), proficiency is important, but it’s not the sole indicator of a teacher’s competency.

There are limitations to using standardised tests to assess English language teachers, Melta says, such as MUET not aligning to the objective of the ministry’s initiative to test teachers’ competency.

“MUET is a four-skill assessment designed for varsity entry and to assess students’ ability to manage academic requirements in higher education.

“The test is neither focused on teaching, nor on context and language English teachers are likely to use.

“So how can the test results be mapped against the language competency needs of English teachers?”.

There are other existing assessments designed to assess competency, the association says in a statement.

“Valid and reliable means to determine and assess an English teacher’s proficiency are a must if outcomes are to be accepted.

“Sustainable competency among English language teachers can be achieved if they are provided the appropriate environment and support programmes for their development and growth.”

Melta, however, commends the ministry for its initiatives to upgrade the quality of teaching English in the country.

“Melta is prepared to support the ministry in the move to improve English proficiency among students.”

Universiti Malaya Faculty of Education department of language and literacy education senior lecturer Dr Zuwati Hasim questioned whether it’s necessary for English language teachers to sit for the MUET, and the rationale behind it.

She says instructing teachers to sit for a test because of the poor performance among students in speaking the language, is not the best move.

training programme or into a Bachelor’s Degree of Teaching English as a Second Language (TESL).

“By right, all English option teachers (would) have sat for at least one proficiency test, be it MUET or IELTS.

“Some teachers feel it is a downgrade and an act of distrust.

“We need to tackle the real issue, find the root cause. Are teachers solely to be blamed for the lack of English language proficiency among learners?” she asks.

Dr Zuwati says for an assessment to be valid, it should achieve what it was designed to measure.

MUET is used as an entry requirement into local universities, so how can it be a good gauge of English option teachers’ proficiency, she asks.

“Instead, the ministry can invest more on professional development training for teachers which should include pedagogical training as well as leadership training.”

“We have requested the ministry to bring in more stakeholders such as the Parent Action Group for Education Malaysia, the minister’s advisors on teaching of English, examination divisions, conducting teacher training and reviewing the curriculum.

“It’s only then we believe we can contribute effectively towards the goals as set out in the English Language Education Reform in Malaysia: The Roadmap 2015-2025,” he says.

However, early last month, Deputy Education Minister Teo Nie Ching says these teachers will have to sit for it to allow them to teach the language and to upskill themselves.