Back to tests to assess

Changes a-coming: Muhyiddin at an earlier meeting to discuss the problems teachers had with the PBS system. It was later decided that teachers would not have to key in data online.

It is a system that will gauge students on their higher order thinking skills, but apart from the increased levels of stress caused to all parties, not much has been gained from PT3.

PENTAKSIRAN Tingkatan 3 (PT3 or Form Three Assessment) is being used to assess Form Three students from this year.

However with the assessment literally just days away, students, their parents and teachers are no clearer on what it really entails.

What has been revealed to them is the examination will consist of case study instrument assessment, oral and written tests.

Natasha, whose daughter is about to “face” PT3, says a briefing was held in May by the school for parents but with little information revealed during the session.

The only response she had from teachers when questions were raised was: Ini arahan dari Lembaga Peperiksaan. Kita pun tidak tahu apa formatnya. Nanti. (These are instructions from the Examinations Syndicate. We also do not know the format. Wait) 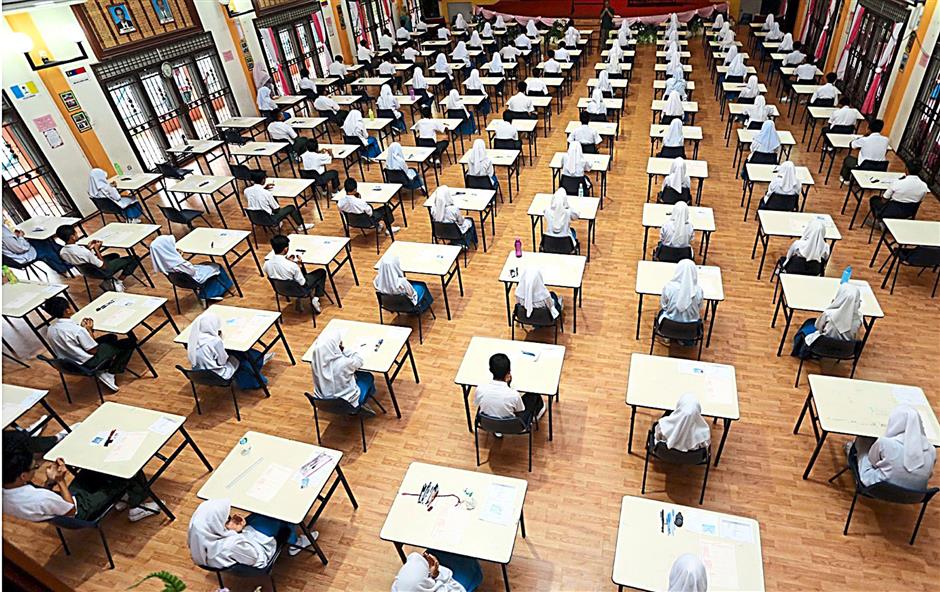 To the old ways? Like the days of the PMR, Form Three students will be sitting for written tests yet again. - File photo

“Many parents are simply tired of the frequent changes (made by the Education Ministry) that they have stopped asking questions. They know they’ve come up against a brick wall,” she says.

The kindergarten teacher is thankful that there are still good teachers who are continuing their lessons in the way that they used to, but adds that there are others who were taking things too lightly by using the current situation as an excuse not to conduct lessons properly.

On her biggest worry about PT3, another parent Meena* says, “I am worried that the students might not be familiar and are confused with the PT3 format. Even the teachers seem to be clueless about preparing their students for the assessment.

“The news about the new format comes too close to the exam date. As usual, it shows that the Education Ministry is ‘playing’ with education policies and changing them according to the pressure from certain groups.”

Meena says her daughter, who being part of the first school-based assessment (PBS) cohort, has had no exposure to any written tests, now has to sit for five papers — Bahasa Malaysia, English, Mathematics, Science and Living Skills.

PBS was introduced in primary schools for Year One pupils in 2011 and Form One students in secondary schools in 2012. Data headache: The dilemma first started when teachers had to key in data on student achievement as part of the PBS, but even after its removal, teachers still face problems in preparing students for PT3. — File photo

“Who is going to mark the papers for the core subjects? Will it be the school teachers or someone else who will gauge them?

“As for the oral tests for Bahasa Malaysia and English, will the school’s teachers conduct them or will they seek the help of teachers from other schools?” asks Meena.

“When it comes to dissemination of information, all that teachers can say is that they are taking it one day at a time, as there have been so many changes over the last two years.

“They are unable to tell the parents much and it is frustrating talking to the teachers.”

Parents who were irked by it all then turned to officers from the Examinations Syndicate who were equally in the dark and unable to answer the queries and concerns raised.

Under the circumstances, it is unfair to blame the teachers since briefings and training sessions on the PT3 format have only just begun. He said the case study instrument assessment for history and geography would be from July 1 to 18, while the oral test (listening and speech) for English and Bahasa Melayu would take place between Aug 6 and 29.

He said students would be measured from Bands One to Six with the former representing the weaker performance.

Form Three teachers from around the country have expressed concerns about the seemingly last minute announcements and limited information on the PT3 assessment.

A Negri Sembilan secondary school panel head of English language says the sessions to familiarise teachers with the new format are being conducted “at the last minute” as some assessments are due to begin later this week.

“I think the training is being conducted to pacify parents.

“The school sent a History teacher for training to familiarise himself on the type of instruments (form of assessment) used in the new format, but the teacher returned saying he was still uncertain,” she says, adding that while teachers will be able to “survive” the changes, it is certainly unfair to the parents and students.

“With all of us being in the dark, how are we to train our students on the PT3 format?”

“The problems will only arise next year when the students are placed in either the arts or science streams.

“I think PT3 shouldn’t be implemented right now when students are in the third year of secondary school. Maybe this format should be introduced to Form One students,” adds the teacher.

Meanwhile Johan*, an English teacher from Malacca, says students have not been trained to answer questions under the new format.

“More work and time will be needed to prepare the students.

“Hopefully, if teachers teach well, students should be able to answer the questions,” he says.

He is also concerned that teachers may not have enough time to mark the final papers.

“In the Penilaian Menengah Rendah (PMR), there were multiple choice questions and essays but in PT3, it will all be subjective.

“This will take a longer time to mark especially with the higher order thinking questions, where students must explain or apply concepts.”

To make matters worse, the Examinations Syndicate has declared that the results must be released by the end of the school term which leaves little time for the papers to be marked, Johan says, adding that this was not the case with PMR as its results were released during the year-end school holidays.

“These aren’t just normal exercises or homework. We need to be careful when marking assessments,” adds Johan.

Seremban teacher Shakina* says PT3 is “confusing” but she remains cautiously optimistic about the new format.

“Teachers have recently begun to learn more about the new format but we don’t have the real picture yet.

“We teachers are having a tough time preparing the students at the last minute,” she adds.

Shakina says she has not yet been called for training but that she and other teachers at her school are all set to attend training.

“I’m happy that there will be some method to continuously assess the students and help them along the way.

“All the teachers will also get experience marking assessments. Previously only the experienced teachers get to mark exam papers.

“I am looking forward to more information from the ministry,” she says.

Meanwhile, Geography teacher Aaron* from Selangor says his concerns were if his students would still be interested in the subject.

“PT3 is okay, at least it is less of a burden than PBS.

“Whatever plans they have, I hope it ensures the students’ interest in Geography continues at the SPM and STPM levels. Hopefully PT3 will benefit teachers and students in the long term,” he says.

“(During a PT3 briefing held at a school) the Examinations Syndicate officer who conducted the briefing could not answer questions posed to her. For example, she couldn’t convince parents that teachers would mark the exams fairly.”

She also questions the “check and balance” that has been put in place to ensure unbiased marking, as announced by Muhyiddin.

She says that there were allegations of teachers not checking the work of students.

“For example, students were asked to submit a presentation on CDs. Students who did their work and also those who handed in blank CDs received the same Bands.

“Is this fair?” she asks adding that it boils down to the integrity of the teacher.

Another issue was the selection of questions from the question bank of the Examinations Syndicate.

“Overall, it’s great to come back to an exam-oriented system but then again, it comes back to the way it will be executed,” she adds.

The evolution of PBS to PT3 has left some wondering what becomes of their previous PBS coursework.

The late announcement of examination dates and formats have upset students who are tired of being lab rats for the Education Ministry’s “fickleness in decision-making”.

They also say that their biggest concern is the PT3 coursework that has to be completed in class for Geography and History.

Lack of clear explanations and instructions on PT3 has also affected the students.

A student from an urban school points out how her History teacher had instructed the class to visit the Examinations Syndicate’s website and get the information there as she was unable to guide her students.

National Union of the Teaching Profession (NUTP) Lok Yim Pheng has come to the defence of PT3.

“What we need is a shift from being exam-oriented to focusing more on higher-order thinking skills (HOTS),” she says.

“PT3 focuses more on HOTS. All questions in the tests are HOTS questions.

“To implement something new, there will always be teething problems,” Lok says.

“Generally, parents are not convinced teachers are prepared. They are still unclear on what should be done.

“At the same time, we are not blaming the teachers,” says Noor Azimah.

* Names have been changed