MY friend and one time colleague Dilla in a tone of exasperation asked me recently who was the person who came up with the expression about “the only thing to fear is fear itself’.

“It was Franklin D. Roosevelt,” said Mr Aru, another teacher who sometimes joined us for a cup of teh tarik when he was in town.

“Oh, it was him ... that wise guy,” said Dilla, closing her mouth abruptly.

Aru had been teaching History for more than 30 years so she didn’t dare argue on the origin of that quote.

“But anyway, I bet he never had to stand in front of some 1,000 unruly students at a morning assembly in a secondary school and try to get them to pay attention to something you are saying, even if it is rather boring, without fidgeting, moving around, talking to others or being just noisy.

“Well, alright, it may not seem like the most frightening thing in the world to you guys but believe me, each time I know that I have to go up on stage the next morning as teacher on duty, and address the entire assembly, I can’t sleep at night. I wish that something would happen so that the next day is declared a holiday.

“I wonder if I could somehow trade places with another teacher. If there is one thing I dread more than any other duty, it is having to manage a crowd of inattentive teenagers for an entire hour,” added Dilla.

“You do exaggerate,” said Aru. “School assemblies usually take only about half an hour, or 40 minutes at the most.”

“And where were you during all the Perhimpunan Khas (special assemblies) which drag on interminably, with speech after speech, and student concentration declining at the same rate their noise level increases?’

I remembered the “special assemblies” when there were guest speakers delivering speeches which after the first five minutes seemed to fall on deaf ears. No amount of threatening glances, signals for silence or pleas of tolong jangan bising (please, don’t be noisy) seemed to work on the student audience who were busy carrying on private conversations, sharing jokes and hopping across class lanes to meet up with friends from other classes with loud enthusiastic greetings. The prefects meanwhile stand around helplessly, unable to deal with this magnitude of chaos. 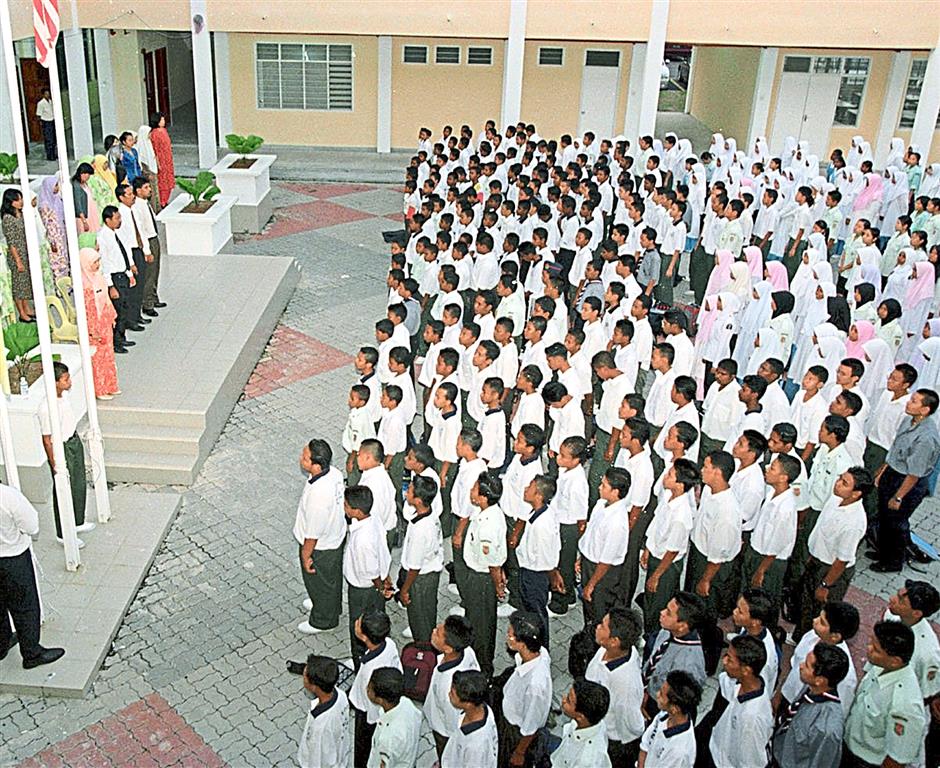 These schoolchildren are ‘all ears’ during assembly but there are instances when students can be inattentive and disruptive at school gatherings. -File photo

The discipline master who could have helped you out is away attending a course and the other discipline teachers are either very busy with other duties or pretending to be.

The person making the speech, drones on, seemingly oblivious to what is taking place beneath him. The growing grimness on the principal’s face makes you very sure of the first item on his list of “areas that need improvement”, during the next staff meeting.

“So,” said Dilla, “going by that other favourite quote about courage not being the absence of fear, I forget who said that, but surely, I must be the most courageous teacher in the world because of the level of fear I need to overcome before going up to manage the student assembly when I am on duty.”

“But then again, it could be the fear of having to explain to the principal why you are not willing to take the stage when you are on duty, that may have overshadowed this fear and made it pale by comparison,” said Aru.

“A greater fear against a lesser fear. We have a philosopher amongst us, how very interesting,” added Dilla.

“But look at it this way,” I said, “why do we always blame ourselves when students don’t pay attention, when they don’t behave, are unruly or difficult to manage? Don’t they have a responsibility to be well-behaved too?”

“Sure,” said Dilla, “but try using that line of argument with any parent or visiting education officer from another department who happens to be present when your students are rowdy. In the end it is always the teacher’s fault for not being able to take control of the situation.”

Teachers who never have to deal with this kind of problem among their students may probably be shaking their heads and saying they don’t understand all the fuss about getting students to pay attention during assemblies.

If students are treated with respect, then surely they will be civil and accord the same respect to their teachers.

However Dilla was quick to point out that such teachers who were probably in schools where there were hardly any discipinary problems shouldn’t make hasty judgements.

“I tried being civil once in my former school,” said Aru in a reflective mood, “but eventually after about 10 minutes of civility and negotiation with totally no effect, I gave up, started shouting and threatened to suspend the whole lot of them. It actually worked, you know. “I had complete attention from that point on and no more trouble.

“However, I don’t recommend it as it goes against the grain of a lot of classroom management principles. During large student gatherings, when faced with possible mass student disrespect, always use threats, threats of suspension, expulsion and calling up parents. Haul some offenders up on stage and the rest will get the drift. I am a strong believer in deterrent measures,” said Aru.

But the fact is teachers usually don’t have that much a of a problem getting student attention in the classroom compared to mass gatherings. The obvious reasons are of course size — the smaller the student group, the easier to manage.

There is more direct interaction between student and teacher and you get to see what’s going on most of the time. Also, you can prepare the content of your lesson to be interesting enough to maintain student attention and interest.

During a school assembly, the 1,000 students somehow don’t always seem to connect with what is being said on stage.

“Think about it ... if you were a student attending the school assembly, how interested would you be about listening to the condition of the school toilets, the cleanliness of the school what the attendance percentages are week after week?

“What the heck, I already know how the toilets are and what is sold in the canteen. How am I supposed to listen to what is repeated so often ... naturally I am going to to lose attention,” added Aru. We all know the truth because of the many times we’ve tried to remain attentive during talks and presentations by invited guest speakers during staff development meetings, when the speakers spoke on topics that was at best, relevant to only a few of us.

Even worse were the ones who insisted on lengthy descriptions of their many glorious achievements.

“So the point is, we need to keep our messages and speeches short and interesting during assemblies in order to keep our students’ attention,” said Aru.

“I doubt anything I say or do will ever get their attention ... as long as they are quiet and well-behaved, that’s good enough for me,” said Dilla.

“You have a phobia,” said Aru who quickly referred to his smartphone. You have glossophobia — the fear of speaking in public.”

“Oh really ... do they have a name for smart alecks?” queried Dilla mocking him.

“Mmm,” said Dilla as she walked away.