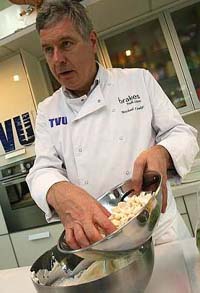 With liberal dashes of humour and enthusiasm to taste, chef Michael Coaker tries his hand at educating young chefs and turns up a winner.

The then 18-year-old Ramsay, who currently hosts culinary-related TV shows like The F Word and Hell’s Kitchen, trained under Coaker when they both worked at the Mayfair Hotel in London.

Although his protege has now gone on to TV stardom, Coaker is no slouch himself in the culinary world.

Having previously worked in France and Switzerland after graduating from TVU, the 53-year-old chef spent 25 years as executive chef and British food ambassador for the Intercontinental Hotel Group. His base was their London Park Lane hotel.

However, when the hotel closed for renovations in 2005, he decided that it was time to hang up his apron.

But it was not meant to be a quiet retirement for Coaker as he was then offered a teaching job at his alma mater, TVU.

“I was judging a competition for the Academy of Culinary Arts when (TVU’s School of Tourism, Hospitality and Leisure’s associate dean) Prof David Foskett told me a lecturer had broken his arm and asked me to cover for him for seven weeks.

“I’ve been there ever since!”

Although he has not been a lecturer for very long, Coaker recently received the Education Chef of the Year 2008 award given by the Craft Guild of Chefs in the United Kingdom as a testament to his passion and enthusiasm for educating young chefs. Coaker carefully ladling sauteed mushrooms onto the main dish of Scottish beef fillet at acooking demonstration for the media during his recent visit to Kuala Lumpur.

... teaching young people how to cook better, whether it be for their family, a three-star Michelin restaurant or a local cafe.

Overall, I coordinate the curriculum as well as kitchen operations and restaurant production for all the culinary classes at TVU.

I am also in charge of entering and training our students for competitions, which I’m quite familiar with as I used to frequently participate in culinary competitions myself. Last year, we won the College Restaurant of the Year and the Norwegian Seafood College of the Year.

I am also the main point of contact for our industry links and help place our students for their one-year work attachments.

In addition, I mentor all our new culinary lecturers and support their introduction into education.

... ensuring that all the produce for the day has been ordered, is of top quality and is stored away correctly in the proper place.

Then I meet with Prof Foskett to touch base and run through the day’s work.

After that, I take over the kitchen restaurant class in our student training restaurant Pillars and do the lunch service with the third-year diploma students.

I also teach two sessions a week, usually in the afternoons. 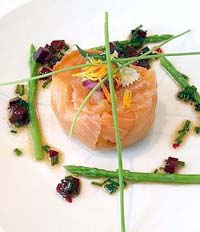 Food must not only taste good, but shouldbe aesthetically pleasing too.

I have a National Vocational Qualification Level Three, which is a top vocational qualification in the UK, and a teacher training diploma.

But most of all, I have 30 years of experience working in top flight kitchens in both England and Europe, and I have travelled extensively for Intercontinental Hotels worldwide.

You also need to have a good network of friends and colleagues whom you can call on anytime for support.

The best person for the job ...

... needs a good sense of humour and empathy with students, plus mutual respect.

You have to be firm but fair, as well as honest and able to work with students of different capabilities. After all, they will not all be Gordon Ramsays.

And you definitely have to be a team player, as the days of the shouting and screaming chef are over in most places!

I think you also have to be outgoing and confident but this comes with experience.

As a chef, you have to be dedicated, hardworking and flexible with your time.

You also need a good palate but that can be trained.

Prospects for the future

I don’t know how it is in Malaysia, but the number of times people in the UK eat out a week compared to my parents’ time is unbelievable. For example, my parents ate out maybe around six times a year; for us, it could be every day!

There are functions going on all the time — conferences, cocktail parties, etc.

And tourism! People are travelling all around the world. I think the hospitality industry is one of the fastest growing sectors in the world, especially with China and India becoming both providers and tourists themselves.

Demand for people in this sector is growing stronger all the time, and colleges cannot keep up with the demand.

In fact, we’ve already started training chefs for the 2012 Olympics in London.

... it is all about passing on your knowledge.

One good thing about chefs is that they have a fantastic network.

For example, when one of the executive chefs at Mandarin Oriental (Kuala Lumpur) heard I was staying there, he came up and introduced himself, and asked me to let him know if there was anything I needed during my stay.

As a chef, I have met some amazing people and travelled the world, while making a good living to bring up my family.

And I love cooking and dining out, so, what more could a chef want?

... are the antisocial hours. I wouldn’t exactly say “dislike” but it’s extra pressure, especially when you’re raising a young family. (Coaker has two daughters and a son, who are all adults now.)

Will I be a millionaire before 30?

If you are willing to work hard enough, have a lot of talent and a little luck, why not? Some people have done it.

Plus some earn far more, especially if you are on an expatriate contract, where you could be provided with housing, a car, health coverage and even school fees for your children.