Moral from Puteri Santubong story is one needs to treasure one’s loved ones without neglecting others.

I’M sure most Sarawakians would know Gunung Santubong and have heard stories about it from one source or the other.

As I was driving with my friend Leona, who is an Iban from a nearby longhouse, to Sarawak Cultural Village, she excitedly pointed out Gunung Santubong from afar and asked my opinion on what it looked like.

Without waiting for my answer, she continued that it looked like a pregnant woman lying on her back.

Indeed, it looked like a pregnant woman lying on her back and ever since that day, I’m intrigued by the legend of Puteri Santubong after being teased by Leona, who refused to tell me what the legend was all about.

Apparently, she found it amusing that I’ve never heard of Puteri Santubong.

Back at my office at Borneo Highlands Resort, I researched the legend and found quite a lot of informative websites dedicated to the legend.

Gunung Santubong is located 35km north of Kuching and is approximately 2,658 feet above sea level.

My colleague Margaret, who is a local Bidayuh, told me that the name “Santubong” originated from an Iban word “Si antu ubong” or the “spirit boat”.

The spirit boat is actually a coffin shaped like a boat carved from a single wooden log to represent a vessel used by the spirit of the dead to travel to the other world and when Gunung Santubong is mentioned, inevitably the name “Gunung Sejinjang” would surface too.

Determined not to be toyed by Leona the next time we met, I took the chance to learn more about the legend from Margaret and also from websites.

There is also a folk song related to the legend that I found interesting, sang in local Sarawak Malay.

There are a few versions of the legend and the one that Margaret emphasised as the original story is:

Puteri Santubong and Puteri Sejinjang were daughters of the King of Heaven and were the two most beautiful princesses in the world and they descended from their heavenly palaces to take care of the mountains in Sarawak and people who lived there.

On earth, they worked just as normal people did: Puteri Santubong worked as a weaver while Puteri Sejinjang worked as a paddy thumper.

They were best friends and they did many things together. However, their friendship did not last.

One day, a handsome prince from a land afar came to Sarawak. His name was Putera Jaya and the prince, after meeting Puteri Santubong and Puteri Sejinjang, fell in love with the former.

This did not go well with Puteri Sejinjang as she also fell in love with the prince.

Not only did Puteri Santubong neglect Puteri Sejinjang, she was also careless in carrying out her job as the warden of the mountains and its people, including her job as a weaver.

This did not bode well with Puteri Sejinjang as not only had she lost her best friend but she also had to shoulder extra responsibilities guarding the mountain and its people.

Now both princesses no longer talked to each other and the only time the two princesses did so was when they hurled curses and accusations at each other.

The people suffered from this and natural disasters came one after the other.

Puteri Sejinjang finally decided that enough was enough and went to see Puteri Santubong. When they met, all hell broke loose and the people suffered a great thunderstorm that lasted for days.

The people rejected Puteri Santubong and in great despair, she went to Puteri Sejinjang’s body and cried for many days.

As days passed, Puteri Santubong was on the brink of death and she called to the heavens for her father but to no avail.

During her final moments, she was cursed to become a mountain – Gunung Santubong, as a lesson for all.

Such is the sad and tragic legend of Puteri Santubong that I learned. Indeed one needs to treasure one’s loved ones without neglecting others.

Aside from that, apparently Mount Penrissen at Borneo Highlands Resort also has its own share of legend.

Margaret shared to me that there was a legend that concerned seven beautiful fairy-like princesses from the heavens who frequently visited.

However, that is another story for another time. 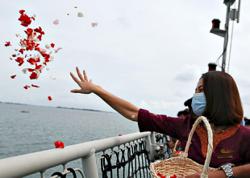