UPGRADING work is in progress at the Taman Tun Dr Ismail (TTDI) interchange in Kuala Lumpur to reduce the congestion in the area.

The project is being carried out at a cost of RM133mil by Lingkaran Tranks Kota Sdn Bhd (Litrak), the concessionaire of the Damansara-Puchong Highway (LDP).

“This project is a major part of Litrak’s continuous enhancement programmes along the highway,” Litrak communications manager Bhavani Krishna Iyer told StarMetro during a visit to the construction site. 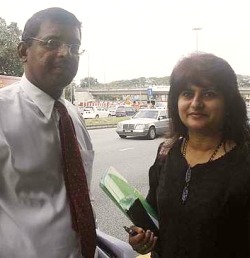 “Having completed some major enhancements at the southern section in Puchong, we are focusing now on this northern section.

“In fact, in the northern alignment, we have done some improvement work at Bandar Sri Damansara and Kepong.

“The upgrading work for the TTDI interchange is needed as about 110,000 vehicles use the area and the traffic lights junction daily,” she said.

“This has exceeded the interchange’s capacity and the criss-crossing of local and main traffic has worsened the situation,” Bhavani said.

The first is the construction of a new two-lane flyover bridge from Kelana Jaya to Bandar Utama for northbound traffic towards Kepong.

“People heading for Kepong will need to keep right once this new bridge is ready,” Dass said. Work in progress: The construction has already begun and is expected to be completed by 2011.

“If you go under the new bridge, it will be towards Bandar Utama or turn right to Taman Tun. This will help segregate the traffic flow so that the main traffic would not have to mix with local ones,” he said.

The second project involves the construction of an 800m two-lane underpass from TTDI to Bandar Utama and Kepong, starting from Jalan Damansara and ending shortly before the TV3 complex.

Currently, the area around this interchange operates on a three-phase traffic.

According to Bhavani, once this underpass is ready, it would reduce one phase of traffic so motorists can travel on a through road without having to stop at traffic lights.

“What’s left would just be two-phase traffic, so waiting time would be cut short,” she said.

The third project is the widening of northbound local slip roads.

The slip roads are now four lanes. However, when the new bridge is up, it would take up two of the four lanes and so two-lane slip roads then would be expanded to three.

The already saturated LDP would be choked further given the new rapid developments coming up in the area that only serve to generate additional traffic.

“Developers should not just push everything onto the LDP that is already overflowing with cars,” Bhavani said.

“Right now, we are doing all we can to improve the traffic flow.

“For certain enhancements, we will need to work with the local councils to improve the situation,” she said.

The TTDI interchange upgrading project started in August last year and is expected to be completed by 2011. The current progress status is at 25%.

Several residents from TTDI and Bandar Utama were present at the site briefing.

The residents raised their concerns over the traffic situation and requested for a separate forum when they could discuss with Litrak the issues related to the project.