In memory of Tun Mustapha

A violin used by one of Malaysia’s founding fathers Tun Datu Mustapha Datu Harun to entertain special guests and friends is among items on display at a gallery set up by Yayasan Sabah.

The Tun Mustapha Gallery was set up in memory of the charismatic though sometimes controversial Sabah leader.

Pictures of the former office boy, who went on to lead Sabah into independence and become the state’s first Yang Di Pertua Negeri (Head of State) and later Chief Minister, adorns the walls of the gallery in the atrium of the 30-storey suspended tower, Menara Tun Mustapha, one of only four such buildings in the world.

The gallery, with a vast collection information of Mustapha, also charts the various development projects undertaken by the leader during his tenure as Sabah Chief Minister between 1967 and 1976.

Among other exhibits are pictures of him joining Umno, paintings, pictorials, artefacts, clothing, newspaper clippings, articles and publications featuring his life.

Mustapha is credited to have set up Yayasan Sabah, which has over years helped provide socio-economic and educational development for the people through harnessing the state’s timber resources.

Today, Menara Tun Mustapha is a tourist attraction and Yayasan Sabah hopes to woo more visitors to the building by setting up the gallery.

“Menara Tun Mustapha is already drawing large numbers of tourists to snap pictures of the building.

“Now, with the gallery, tourists will be able to learn more about the building and the man behind it,” said Yayasan Sabah deputy director Datuk Johan Ariffin Samad.

Johan, who invited tourism players and hoteliers to visit the gallery set up earlier this year, said it was a source of information for researchers, particularly in regard to Mustapha’s political struggles and contributions to nation building.

Mustapha became Sabah’s first Head of State when the state gained independence on Sept 16, 1963, and later was the state’s third Chief Minister from 1967 and 1976.

In 1991, he dissolved his Usno party to pave the way for Umno’s entry into Sabah. 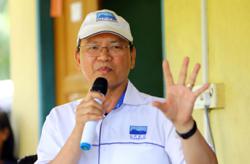