Taxi and e-hailing drivers face risk of contracting Covid-19 due to the nature of their work. — Filepic

Neither Seelan, as he was fondly known as, nor his family had suspected that he was infected, having exhibited none of the symptoms synonymous with the virus.

Seelan merely experienced fatigue, which was understandable for a 68-year-old man who had been putting in long hours to make ends meet, given the drastic decrease in passengers in recent times.

On June 28, he was supposed to drive me to Setia Convention Centre in Shah Alam for an assignment but called to cancel the trip, saying his legs had buckled and that he was feeling very sick.

When rushed to a nearby clinic by his family, it was discovered that Seelan had Covid-19 and he was immediately transferred to Hospital Tengku Ampuan Rahimah, Klang (HTAR) in an ambulance.

A couple of days later, he was intubated and put in an induced coma, from which he never emerged.

Luckily, all his family members subsequently tested negative for Covid-19.

The Klang-based Seelan was a very chatty and likeable person, and had many regular passengers.

I first took his taxi 14 years ago and we became fast friends.

Besides driving me around whenever required, he also helped the animal rescue organisation that I am a part of — Malaysian Dogs Deserve Better (MDDB) — by picking up and delivering veterinary prescriptions and groceries.

He would even collect medication from the Gasing Veterinary Hospital for my two senior dogs for their heart and liver problems, respectively.

It was also Seelan who helped me renew my driving licence last year.

To me, he was like a brother from another mother.

I will miss him tremendously and am saddened that such a tragedy had to befall him and his family.

While we had no information on where Seelan might have caught the Covid-19 virus from, it would be undeniable that he and other taxi drivers faced the risk due to the nature of their job.

This drives home the need for taxi, e-hailing and bus drivers as well as p-hailing riders — whose job leaves them exposed to the virus daily — to be vaccinated as soon as possible.

During the Transportation Sector Vaccination Programme for seafarers and port workers in Port Klang on June 25, Transport Minister Datuk Seri Dr Wee Ka Siong said his ministry and the Covid-19 Immunisation Task Force were coordinating the vaccination of some 355,064 taxi, e-hailing and bus drivers as well as p-hailing riders.

Dr Wee had added that the exercise would be carried out at the vaccination centres, and that the government would fully bear the cost.

Currently, public transport service providers are at great risk of contracting Covid-19 in Klang, which has transformed from being a haven for foodies and history lovers into a hotspot for Covid-19 infections.

The long queues at the district’s Covid-19 assessment centres and the massive numbers of patients at HTAR, not to mention the bodies piling up at its mortuary, speak volumes of how this dastardly virus has grabbed Klang by the throat.

Hopefully, this nightmare will end sooner than later.

As for my dear departed friend Seelan: Rest in peace, brother.

I will never ever forget you! 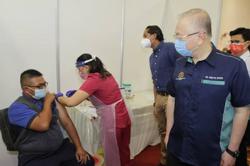 Relief a side effect of Covid-19 jabs
‘LHDN won’t make deals over phone’
Good, fast or cheap pick two
Making it convenient will help boost vaccination rate in Perak
Injecting hope for fast recovery
Missing jab date has wider effects beyond one person
A virus battle tale of the wild kind
The doubtful among the herd
Resilience will keep us on road to recovery
One food station too many