Have your cake and eat it too

Sibling power: Juliana and her brother Hakim are the force behind Bake To Play.

JULIANA Omar finds baking fun and intensely satisfying. In fact, the petite baker finds so much pleasure in baking that she quit her job to set up Bake To Play, a one-stop centre for those who crave special cakes or dessert treats.

Juliana was very much inspired by her mother, a former baking teacher.

After learning the basics of baking from her mother, she started experimenting with her own flavours, which helped her with product development when she eventually joined the world of entrepreneurship.

The cake business started in 2013 under Bisque Bites Sdn Bhd as an online, made-to-order cake connoisseur. 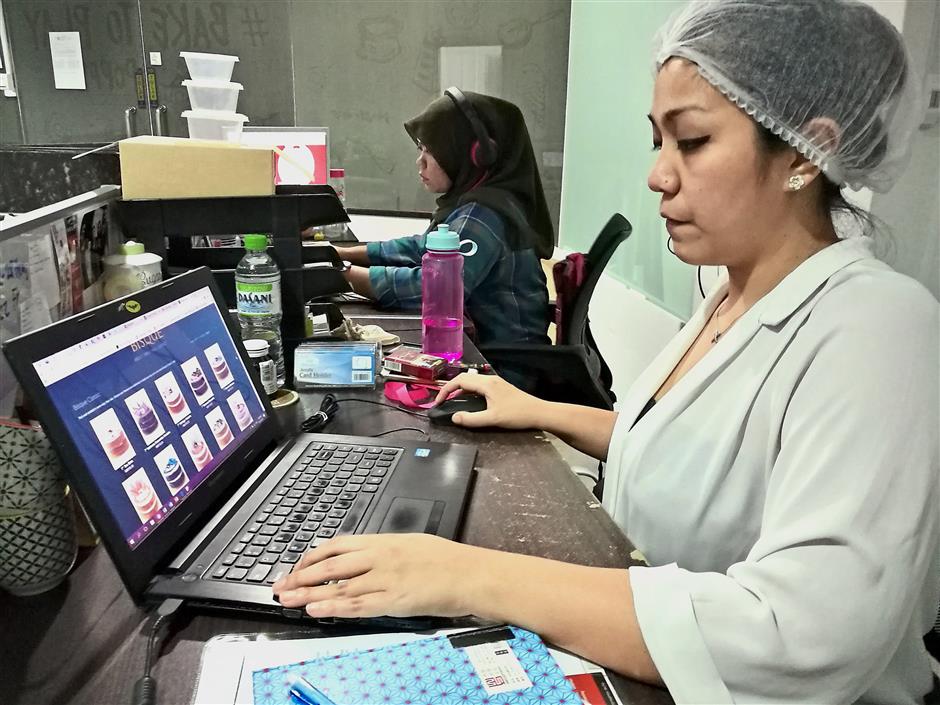 Here to help: Akila attends to calls from customers at their office.

The online model made it easy to reach out to customers. Customers would browse through Bisque’s wide range of offerings on the website and click to order.

But running her own business took some getting used to. Initially, she had to juggle between a full-time job and an overwhelming number of orders for cakes.

“I’ve always had the passion for cooking and baking. When I first started, I was struggling to manage everything. Then my brother, Hakim, came along and helped me.

“Our vision was to create and deliver only the best, high quality desserts,” says Juliana, who was formerly in the media industry.

The hardest part about starting the business, she says, is taking the leap to go into it full time. The risk is great and there is no certainty of success.

It was only after her brother joined her that she dared to make drastic changes to grow the business.

The siblings found a proper location with proper equipment and a team. They also created an e-commerce website to make it more convenient for customers to select their cakes and place their orders.

She also invested RM150,000 into setting up her kitchen to get the business going.

Having done this for several years now, Juliana notes that the experience has been priceless and “worth the effort.” Kitchen elves: A young and energetic team making the cakes at its central kitchen in Damansara Perdana.

Early this year, Juliana created the over-arching brand Bake To Play that covers all aspect of the cake distribution business so that it can offer customers a one-stop solution.

The name was chosen as such because it sounded fun.

“It is a mix of passion and business under one umbrella, hence Bake To Play. Cake business should never be too serious,” says Juliana.

Under Bake To Play, there are four brands that covers four different segments of the business, namely, Bisque, Wildcard, Bisque Café and Poppy.

Bisque continues to offer customers with a menu of cakes that they can order from through the website while Wildcard provides bespoke, customised and exclusive cakes for order for special events like weddings.

Poppy is a business-to-business dessert supplier that supplies treats to other cafes in the Klang Valley. It offers a selection of cakes and desserts at a lower price and is cost-effective.

“Poppy is a one-stop solution centre for other F&B establishments, be it a large or an independent café joint. We offer a convenient service with a wide selection of desserts like mille crepe cakes, cheesecakes, basic naked cakes, pies, tarts and brownies and a selection of quiches,” she says.

Juliana credits her creative team for their masterpieces.

She emphasises that Bake To Play does not use preservatives and every product is homemade with no artificial flavour, cake stabilizers or enhancers. This gives the cakes and desserts their distinctive original taste.

“But we do use ready-to-roll sugar paste and gumpaste for our fondant, which is mixed with our own homemade fondant recipe to keep the originality and to give it that homemade touch,” says Juliana.

Extra attention is given to the quality, texture and taste of all their products.

“We only use high quality butter and vegetable oil. Our products are strictly pork-free and we do not use alcohol. The ingredients and suppliers used are carefully selected, and are halal-certified with proof of recognition provided by the suppliers,” she adds.

She notes that the cakes should be served at room temperature and storage is best done in an airtight container, a chiller or refrigerator to maintain the cakes’ moistness and preserve the taste and smell.

All cakes can be collected at Bake To Play’s office in Damansara Perdana, Petaling Jaya.

Assisting Juliana is Bake To Play marketing manager, Akila Sharif, who takes all the calls and orders from their office and central kitchen.

In mid-2015, Juliana also launched Bisque Cafe to take her cake business to the retail ground. Apart from cakes, the cafe also served a full range of cafe delicacies.

However, the cafe closed its doors late last year for a rebranding exercise and Juliana hopes to open an outlet in the Klang Valley soon.

Bake To Play has also partnered with GoGet Services to make deliveries within the Klang valley so that it is more convenient for customers who can’t pick up their orders.

“For self-pick-ups, it’s best to collect the cake at our place on the day itself. For deliveries, the charge is RM10,” says Juliana.

Next in the pipeline is a baking studio to teach other people how to bake. Just as she had learned from her mother, Juliana hopes to pass on her knowledge to others.

“We recently started our very own YouTube channel too, where viewers can learn recipes, tips and tricks on baking,” she says.

This has helped Bake To Play with some of its promotional efforts. Juliana says its brands are mainly promoted through word of mouth and on social media.

“We also plan to go into retail and other services related to baking and desserts,” she adds.

All the cakes at Bake To Play are from Juliana’s and her mother’s personal collection of recipes. She continues to experiment and improvise along the way to produce more treats for her customers.

“We have cakes and everything dessert. You name it, we make it.”

“We will eventually go into pastries and other types of food. But right now the focus is desserts as there are many other new recipes yet to be discovered,” says Juliana who is assisted by 10 young and energetic individuals, including the pastry and corporate teams.

'Paid salaries for not doing anything' allegation too heavy an accusation against teachers, says survey
Perak Pakatan leaders arrive at Istana Kinta to seek audience with Sultan
CPO futures likely to consolidate next week with bouts of profit taking
Cops raid online gambling call centre at KL apartment
U.S. government ordered to reinstate protections for 'Dreamers'
UK Maritime Trade Operations says aware of attack on vessel off Yemen coast
Teenager saved by friends who 'bash' crocodile into submission
Get more than just ACCA at Taylor’s
Grab launches GrabSupermarket in Klang Valley
What Malaysians can learn from asphalt roads in Japan