A damaged kitchen due to the landslide on Friday evening in one of the affected houses in Taman Halaman, Ampang.

RESIDENTS of Taman Halaman, Ampang, who built a retention wall facing a hillslope behind their houses were unaffected by the landslide that hit on Friday (Nov 10) evening.

A resident that did not want to be named said she is confident her house will not be affected by the landslide because she has a sturdy retention wall. Her family was told to evacuate their house but they decided to stay as they feel safe.

“We still feel it is safe to live here. The houses that were affected do not have a retention wall, hence they are affected. This is our family home and we want to remain here for now,” she said.

Several occupants of houses along Jalan Halaman 6 were told to evacuate after the Friday evening landslide.

Only two houses were affected badly by the soil landslide.

When StarMetro visited the site, one of the affected houses had an occupant visiting the scene.

The Selangor Fire and Rescue Department, police and Malaysia Civil Defence Force personnel are stationed at a playground in the neighbourhood to monitor the situation.

On one of the affected houses, 45-year-old June Cha said that it belongs to a friend and added that its six residents have moved to a relative's place.

The kitchen of the house is badly damaged; walls are broken and soil from the hill has entered the house.

“My friend’s family lives here. They were told to remove their important belongings but it was hard to evacuate the belongings in the house because the soil had entered the first floor. Thankfully no one was harmed,” she said.

Meanwhile another resident Khamis Idris, 74, said his retention wall collapsed on Nov 15. Since then he, his son and his wife had moved out to live elsewhere.

“When I bought the house in 1988 there were two drains built on the hillslope by the developer. This drain was purposeful as it helped to channel the rain water. Over the years the drain was covered by the soil from the hillslope.

“I am not sure what to do next. Maybe I will turn this house into a storeroom. I bought this property in 1988 for about RM200,000 due to the weak economy then,” he said.

He added that the Ampang Jaya Municipal Council had helped him to clear the soil from the Nov 15 erosion and even placed a canvas to protect the exposed soil.

However because it is private land, the authorities do not have much responsibility over it. 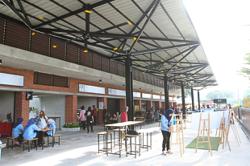 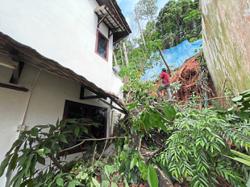