SHAH ALAM: A CONTRACTOR has been slapped with a stop-work order for carrying out earthworks without approval on Bukit Kerayong in Kapar, Selangor.

A warning was also issued, reminding the contractor to apply fo planning approval from the Klang Municipal Council (MPK) within 30 days.

He was replying to questions by Dr Daroyah Alwi (PBM-Sementa) at the state assembly sitting in Shah Alam about the works being carried out in Bukit Kerayong and Bukit Cherakah. For Bukit Cherakah, Ng said checks by the Petaling Land and District Office found the contractor had received planning approval on Sept 26, 2017.

"The site is located in Section U10 Shah Alam. The transfer of ownership of the site has also been completed," he noted.

However, no details were given on the types of development planned at the Bukit Kerayong and Bukit Cherakah sites.

Daroyah pressed further on the measures taken by the authorities to ensure such activities would not cause flash floods in nearby areas.

In response, Ng said all contractors in Selangor were required to obtain planning approval from their respective local councils before starting work.

He added that they were also required to build temporary drains and sediment traps to ensure unobstructed water flow during downpours.

Commenting further on the works on Bukit Kerayong and Bukit Cherakah, Ng stressed that the landowners must submit their earthwork plans to MPK Engineering Department for review.

"Additionally, they must also get approval from the Drainage and Irrigation Department before any construction could commence," he added. 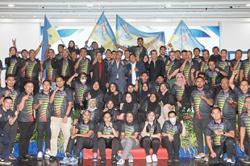