Murugaiyah attending to residents at the shelter in Taman Saleng Indah, Kulai — Filepic

The association also receives a RM350,000 yearly grant from the Federal Government which fully goes towards the residents’ meals, he added.

“I hope both the federal and state governments will increase the sum, considering the hike in prices of essential items and operating costs.

“The next two years are expected to be more challenging and like other welfare organisations, we are likely to face tough times ahead,’’ said Murugaiyah.

The shelter needs between RM1.8mil and RM2mil annually to provide for 200 residents aged between six and 50, most of whom have been abandoned by their families.

The association was founded by V. Rajamanikam in Taman Melodies, Johor Baru, in 1990 before moving to its present location in Taman Saleng Indah, Kulai.

It also runs shelters for some 200 children in Banting, Selangor, Bukit Baru in Melaka, Kuantan and Kuala Terengganu. Fauziah (right) interviewing an applicant for the food basket programme by Kita Kongsi.

She said although Malaysia was now in the transition phase to endemicity, escalating prices were still the organisation’s main concern.

“The number of people seeking food baskets has increased from 70 in 2019 to 100 now every week,’’ said Fauziah.

“We are allocating RM20,000 monthly from our own funds for the food baskets while donated food items amount to around RM8,000.”

Fauziah was, however, grateful for the state’s financial assistance to repair PKJSB’s shelter for girls in Kampung Pasir, Tampoi.

“We need to boost the domestic economy in anticipation of the challenging times within the next two years,’’ he said.

Salleh said Johor had the right ecosystem to continue attracting domestic and foreign investors as proven over the years where the state always emerged as one of the top investment destinations.

The presence of investors would create economic spillover effects not only for Johor but also the country as a whole, he stressed.

“The state government also needs a mechanism to address the escalating prices of essential items,” he added.

Separately, Salleh hoped that the Johor government would raise public awareness of consumerism to help people better manage their finances.

“The last time we received financial allocation from the Johor government was in 2016.

“We have had to fork out our own money to organise activities and programmes,’’ he said, adding that about RM50,000 is needed to run the association. 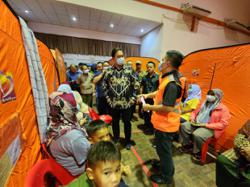