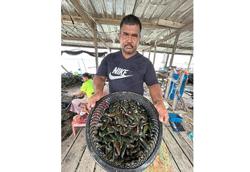 Kelah fears the mussel farm in Sungai Masai will be shut down.

The new farm is part of the Fisheries Development Authority of Malaysia (LKIM) and the Johor Fisheries Department’s effort to increase the production of mussels in the state, he said.

“We expect the first harvest to be in January next year, as we have received reports that the farm has shown a positive sign of growth.

“However, we have yet to estimate how much it will produce because the farm is different from the one we currently have in Sungai Masai.

“The Sungai Johor (river) current is a bit stronger than Sungai Masai’s, which could affect the production,” he said when contacted.

Mohamad said the Sungai Johor mussel farm was in the trial phase to see if the mussels could grow to a standard size and that the seeds would stay on the mussel ropes or collector lines.

“We have placed around 10,000 mussel ropes for this trial, but since this is the first harvest, the amount produced would be less than the one in Sungai Masai,” he elaborated.

Asked to comment on whether the Sungai Masai mussel farm would be shut down if the trial in Sungai Johor was successful, Mohamad said there was no decision on the matter yet.

“The current plan is to increase the production of mussels, so I don’t think shutting down a mussel farm will be in line with that plan.

“We are also looking at other locations besides Sungai Johor and Sungai Masai to see if we can expand mussel farming to other areas in Johor,” he added.

According to the Fisheries Department’s data, there are 150 fishermen involved in the mussel farm in Johor Baru, with a total production of 1,296 tonnes in 2021.

“This has been our main source of income for more than 20 years, and now there are rumours that the mussel farm will be relocated to Tanjung Langsat,” he said.

Kampung Teluk Jawa village chief Awie Mi also shared the same fears, saying they had no source of income other than harvesting mussels.

The new mussel farm is located in Sungai Johor, near Tanjung Langsat, and is able to produce about 100,000kg of mussels per year once they have fully matured.