STARTING Thursday, single-use plastics will be off limits at all Kuala Lumpur City Hall (DBKL) premises as part of its efforts to eliminate the use of non-biodegradable material by 2030.

Mayor Datuk Seri Mahadi Che Ngah said the initiative was to inculcate among council staff a responsible habit on usage of single-use plastics.

“DBKL employees can act as role models for other Kuala Lumpur folk, before a similar programme can be expanded citywide.

“This is part of our action plan to eliminate the use of such plastics by 2030,” he said during the launch of the “Recycle Reverse Vending Machine” at Menara DBKL 1.

The ban means DBKL employees can no longer bring single-use plastics to work, including bags and food packaging from delivery services.

“A majority of this waste is recyclable,” he said, adding that the directive also applied to food suppliers for DBKL’s internal events.

The launch of the “Recycle Reverse Vending Machine” is a collaboration with AmBank Group and Orie Engineering Sdn Bhd.

Users can deposit small recyclables in exchange for 5sen, which will be credited into their account via QR Pay.

He said this was part of its corporate social responsibility initiative to help DBKL in its green efforts for the capital city.

Recyclables accepted by the machine include used plastic bottles, food and drink cans, as well as juice boxes.

DBKL had, on Jan 1, 2020, enforced a ban on plastic straws under the Local Council Act 1976 to step up efforts against single-use plastics.

This came three years after the directive on the compulsory use of biodegradable plastics for packaging by the Federal Territories Ministry. 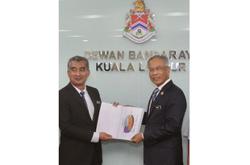