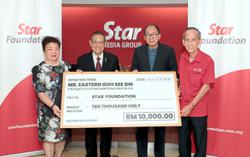 Star Foundation has received a RM12,000 donation to continue its numerous positive initiatives.

NP642 Charity Foundation chairman Johnsen Lim said the contribution was made to commemorate its parent company’s 12th year in Malaysia.

NP642 is a team from Naturally Plus, a direct-selling company based in Japan. Lim said Star Foundation was well respected among NP642’s 20,000 members and this was among the reasons it was donating to the foundation for the second time.

He also announced that they would be holding a charity dinner on Oct 22.

The dinner will be held at Wisma Huazong, Seri Kembangan, with performances by local Chinese singers Vivy Wan and TwinzA lined up.

“We thank NP642 Charity Foundation for its continuous support of our work.

“Star Foundation plays an integral part as Star Media Group’s charitable arm in reaching out and bringing positive impact to vulnerable communities across the country.

“These efforts will continue and hopefully can be expanded with support from corporations and individuals in order to make a bigger difference,” Yeow added.

Since its establishment in 2004, Star Foundation has channelled RM20.5mil to support over 360 charities in their good work.

Through SSIG, the foundation works with NGOs and social enterprises in carrying out impact-driven and sustainable projects to better the lives of local communities and the environment we live in.

Since 2021, over RM380,000 worth of grants have been contributed to fund eight social projects.

Since 2014, a total of 16 children have benefitted from treatment and care funded by public donations and funds from Star Foundation.