THE Petaling Jaya Dispersal Link (PJD Link Expressway) will force many residents and companies to relocate because its route cuts through big residential and commercial areas, says Maria Chin Abdullah.

The Petaling Jaya MP said the route was not practical and would possibly involve major land acquisitions.

"We do not need the elevated highway and multi-storey ramps because it will not solve the traffic congestion but merely shift it to another location."

She said she was perplexed by the persistence to build the highway despite objections from the city's residents.

"The residents are worried about the elevated tolled highway that may cross above or through their properties."

Maria said other cities were adopting new solutions to the problem of traffic congestion and reducing the negative impact on climate change.

She cited the electric and semi-automatic mobility systems planned in Cancun, Mexico and a car-free master plan supported by a smart mobility network proposed in Chengdu, China with a 10-minute walking distance to reach all buildings in each zone.

She also said that enhanced public transportation systems would help increase the economy in the surrounding areas.

"A survey in America found that for every dollar spent on public transport gives a US$4 economic return," Maria noted.

She suggested that mobility incentives be given to residents as well as commercial and industrial companies to move out from the city centre.

The PJD Link project has been estimated to cost RM922mil.

Previously, there was a proposed plan to build the Kinrara-Damansara Expressway (Kidex) but the project failed to take off after the Selangor government pulled the plug in 2015. 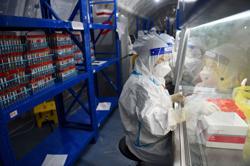