FISHING is not allowed at Kepong Metropolitan Park lake in Kuala Lumpur until the pollution problem there is resolved.

Federal Territories Minister Datuk Seri Dr Shahidan Kassim announced the decision following a report by an independent consultant engaged by Kuala Lumpur City Hall (DBKL) which stated that the lake was not suitable for fishing.

Shahidan called off a competition planned there on Sunday before visiting the lake after receiving complaints of its polluted state.

He said water samples collected periodically between June 1 and July 31 were found to have contaminants that were up to 10 times more than what should be in a healthy lake.

“We called off a fishing competition and will not allow any such activity at the lake until it is treated.

“There is a bad smell from the lake, especially in the shallow areas. The stench is unbearable,” he said.

As the situation was dire, the minister said immediate action was vital.

“We have decided to use the dissolved air floatation system, which is used to maintain Putrajaya Lake,” he said, adding that getting a new machine could take a month.

“As such, we may need to borrow the machine used in Putrajaya but that may take about two weeks to arrive,” he added.

In the meantime, Shahidan said DBKL decided to use pumps to create flow within the lake and clear the water surface manually as an immediate measure to minimise the odour.

He added that they would engage with Indah Water Konsortium and other agencies on the matter.

It is learnt that angling activities are not allowed in any lake under DBKL’s jurisdiction, but fishing activities and competitions can be organised with prior approval.

Kepong MP Lim Lip Eng, who accompanied Shahidan during the visit, was happy that something was being done to resolve the longstanding pollution problem.

“This lake is the biggest in Kuala Lumpur," he said, adding that second was the one in Taman Tasik Titiwangsa. 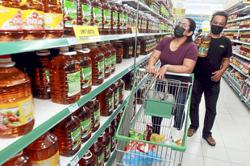