Sulaiman (left) has the added advantage of working as a special officer for two Federal Territories ministers. He is seen here with Mahadi (middle) and DBKL Building Control Department director Norizan Sulaiman.

THE tenure of Kuala Lumpur mayor Datuk Seri Mahadi Che Ngah will expire at the end of this month.

Mahadi, who served as the 13th mayor of the capital city, came back from retirement to take on the two-year contract on Sept 30, 2020.

After having served in Kuala Lumpur City Hall (DBKL) for over 35 years, Mahadi retired as its executive director (Planning) in 2018.

Due to his impeccable service record, he was brought back on contract to serve as advisor to his predecessor Datuk Seri Nor Hisham Ahmad Dahlan on planning matters pertaining to the Draft Kuala Lumpur City Plan 2020.

When Nor Hisham’s contract expired, Mahadi was appointed as mayor.

With just a few days remaining before his term expires, it is business as usual for Mahadi, who has shown no signs of slowing down.

He has been going to the ground every day, checking on the city’s flood management preparations as well as attending back-to-back meetings that tend to go on until midnight.

However, the guessing game has started on whether Mahadi will be replaced or have his contract extended.

As the country braces for a general election, some quarters feel it is not the time for a new person to helm DBKL.

There are also those who feel that once Parliament is dissolved, a caretaker government would benefit from having a friendly mayor on its side.

Even though Mahadi fits the bill, some think his term will not be extended.

“Mahadi is passionate about the green agenda. He was so persistent with it that you can now see the fruits of his labour in Wangsa Maju,” said a senior DBKL director who did not want to be identified.

Some opined that Mahadi, who kick-started green initiatives like the Wangsa Maju Carbon Neutral Growth Centre, Low-Carbon Society Blueprint among other programmes to move Kuala Lumpur into a carbon-neutral city, should be given more time to see his projects through.

“But he faced a lot of resistance from his own colleagues in DBKL, many of whom are his peers, who started working there the same time he did over 30 years ago.

“Of course some feel others should be given a chance to move up too,” said a source.

A retired DBKL director, who served for over three decades and worked with several mayors, including the late Tan Sri Elyas Omar, however, said DBKL would benefit having an outsider.

“Sometimes an outsider can be good for DBKL. Someone with a fresh perspective on things and who is willing to learn.

“A person who is not part of an establishment sometimes has good ideas on how things could be better managed,” he added.

“They were willing to learn and earned the respect of DBKL staff. At Nor Hisham’s farewell, seniors officers were in tears,” he said, adding that an outsider would have little chance of political affiliation.

However, some quarters who spoke to StarMetro on the condition of anonymity, said the city’s new chief would most likely be an in-house candidate.

Apart from Mahadi, there have been only two DBKL officers who were appointed mayor — Datuk Ruslin Hasan in 2004 and Tan Sri Amin Nordin Abdul Aziz in 2015.

The rest had been civil servants from other agencies.

The candidate could also be someone who is retired, as both Nor Hisham and Mahadi were recalled after their retirement.

Potentially in the running is Datuk Sulaiman Mohamed, who is DBKL’s executive director (Planning).

The 59-year-old town planner has vast experience, having worked with DBKL for decades.

The other possibility is former executive director (Socio-economic Development) Datuk Ibrahim Yusoff who retired in 2018.

Ibrahim too has served under several mayors and Federal Territories ministers.

He is also known for his friendly demeanour and is said to be still active and seen attending DBKL and ministry events despite having retired in November 2021.

Feedback from community leaders in Kuala Lumpur show that many prefer a people-friendly mayor who would regularly go to the ground to meet residents.

“We want someone who is knowledgeable about DBKL administration and by-laws and friendly with the community,” said Kampung Malaysia Raya Residents Association chairman Mohd Zainuddin Amran.

Mohd Zainuddin, who is also the committee member of Federal Territory Residents Representative Council (MPPW) for Bandar Tun Razak, said a candidate chosen from within DBKL would serve the people better.

Taman Desa Residents Association (TDRA) chairman Wong Chan Choy wants a mayor who would appreciate volunteerism by communities that worked hard to ensure the neighbourhood was safe and clean.

“We are volunteers and not involved in politics. We hope the future mayor will appreciate that,” he said

He said the mayor must be approachable “like Mahadi, who was very easygoing and friendly”.

“We want someone we can rely on. We also want a mayor who implements policies for the benefit of the people,” he added. 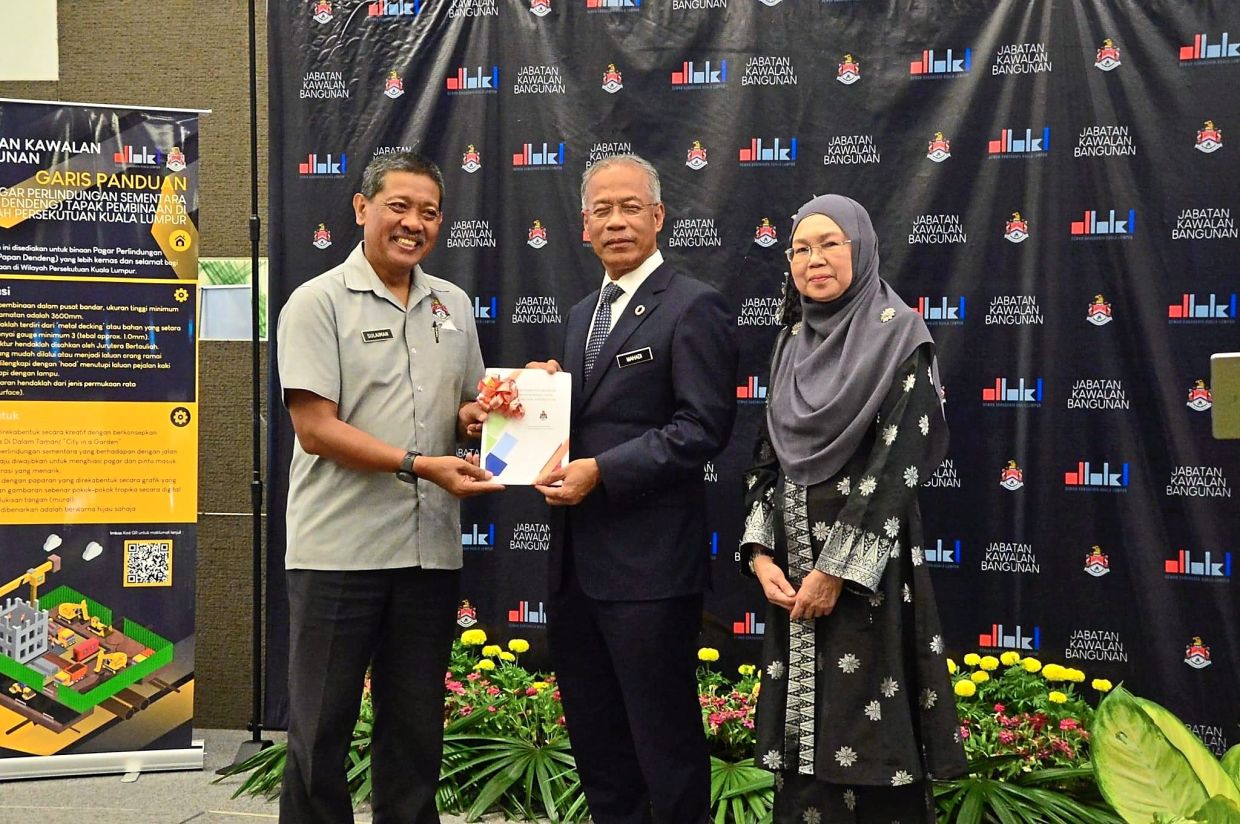 Sulaiman (left) has the added advantage of working as a special officer for two Federal Territories ministers. He is seen here with Mahadi (middle) and DBKL Building Control Department director Norizan Sulaiman.

Balaindran says residents want a mayor who implements policies for the benefit of the people.

Right: Mahadi (left) was brought back on contract to serve as advisor to his predecessor Nor Hisham (second from left). Ibrahim is on the right holding the map.

Mahadi has been going to the ground daily and shows no signs of slowing down.

Mohd Zainuddin feels that a mayor chosen from within DBKL would serve the people better.