Powering the Penang Dream for half century

The VIPs along with other government officials and industry leaders cutting a cake to celebrate the 50th anniversary of MSIA Penang E&E during the dinner.

PENANG is a land of dreams and opportunities where everyone has the chance to succeed and prosper.

Testament to that is its electrical and electronics (E&E) industry, which grew from humble beginnings in the early 1970s to become a major global player today.

“Like the American Dream, there is a Penang Dream. Anyone looking for greener pastures will find it in Penang.

“The grass is greener here because we have visionary leaders and passionate individuals watering and nurturing it every day,” he said.

He was speaking at the MSIA Penang E&E 50th Anniversary celebration dinner in George Town.

In attendance were Penang Chief Minister Chow Kon Yeow, US Ambassador to Malaysia Brian McFeeters, representatives from key government agencies and about 340 industry captains and members.

Taking the crowd down memory lane, Wong said the loss of Penang’s free port status in 1967 provided an indirect catalyst for the birth of its E&E sector.

As unemployment rose to 16% in 1969, then chief minister Tun Dr Lim Chong Eu proposed to set up a Free Trade Zone on former plantation land in Bayan Lepas.

It got the blessing of the late Tun Abdul Razak Hussein who headed the National Operations Council, an emergency administrative body that governed the country from 1969 to 1971.

In 1972, eight pioneering companies, often referred to as the ‘8 samurai’ came in.

“With E&E powering Penang for the past half century, its GDP has grown from RM964mil in 1972 to RM99bil in 2021. This is the equivalent of adding RM2bil every year.

“Penang was also the fastest growing economy of Malaysia in 2021 at 6.8%. The national average was 3.1%,” Wong said to applause from the floor.

The state, he said, was regarded as the Silicon Valley of the East and stood at the forefront in manufacturing the latest semiconductor and electronics products.

He noted that the technological advancements since then were a far cry from the early 1970s, when Intel launched its 4004 microprocessor using 10-micron technology with 2,300 transistors in the die.

“Today, we are talking about 7nm technology with about five to six billion transistors in the die, an almost two million-fold increase.

“And these leading edge products are manufactured in Penang,” he said, highlighting that many E&E companies were leading in sustainability adoption today.

An example is Western Digital’s plant in Batu Kawan, which in April was designated a “Sustainability Lighthouse” by the World Economic Forum – the first in Asia and one of only six worldwide, said Wong.

Such achievements, he said, would have seemed unimaginable and far-fetched in the 1980s or even at the turn of the millennium, which further underscored how far the industry had come.

However, the journey had not been without adversity, he said.

Over the five decades, there had been fires, floods, power outages and water shortages, with more recently, Covid-19 and lockdowns, said Wong.

“The people of Penang not only managed to overcome all these challenges, but also came out stronger every time.

“I hope our leaders will continue to lay the paths and build the roads for future generations to continue to prosper and be globally competitive,” he added.

Among the top leadership of companies present was TF-AMD Penang managing director Neoh Soon Ee, who said they were proud to have been part of the success story.

“The state government has always been investor-friendly. Penang has good infrastructure, no natural disasters and a highly-skilled English speaking workforce.

“It is a standout proposition for investors,” said Neoh.

In his speech, Chow said Penang’s industrialisation journey – from a low-cost manufacturing hub to a strategic site for Industry 4.0, digitalisation, research and development (R&D) and advanced manufacturing activities – had also brought beneficial economic spillovers for the country.

Penang now contributes over 5% of global semiconductor sales and makes up close to 60% of Malaysia’s overall E&E exports.

It topped the country’s list with an all-time high export of RM354bil in 2021, generating a trade surplus of RM101bil.

In terms of investment performance, Chow said the manufacturing and service industries collectively attracted a record high of RM84bil in 2021.

“We are grateful for the continued confidence of investors and will strive to uphold this conducive ecosystem to stimulate the advancement of strategic industries for the next 50 years and beyond.

“With Industry 4.0 spurring changes in many aspects of the world we inhabit today, having a well-developed E&E ecosystem not only enables Penang to move up the value chain but also opens up countless opportunities in other areas,” he added.

Chow said this included the digital economy, which had been accelerated globally by the pandemic.

The highlight of the gala dinner was the launch of the MSIA Silicon North Map plotting all the E&E-related companies’ sites on the island and mainland.

Recognition scrolls were also given to companies celebrating 50 years in Malaysia.

MSIA also presented an RM80,000 contribution to Tech Dome Penang in support of its STEM initiatives for children, which was received by Penang Deputy Chief Minister II Dr P. Ramasamy.

McFeeters later announced that the US was committed to building stronger business ties with Penang and bolstering environmental, social and governance (ESG) standards.

He met with corporate leaders and senior government representatives during his two-day visit to Penang and participated in a round-table hosted by the American Malaysia Chamber of Commerce.

“I am thrilled that Penang continues to be a solid partner with US companies in promoting high-tech investments, skilled job opportunities, global ESG standards and supply chain resiliency.

“We are committed to strengthening the enduring commercial partnership between the US and Malaysia for many more years to come,” added McFeeters. 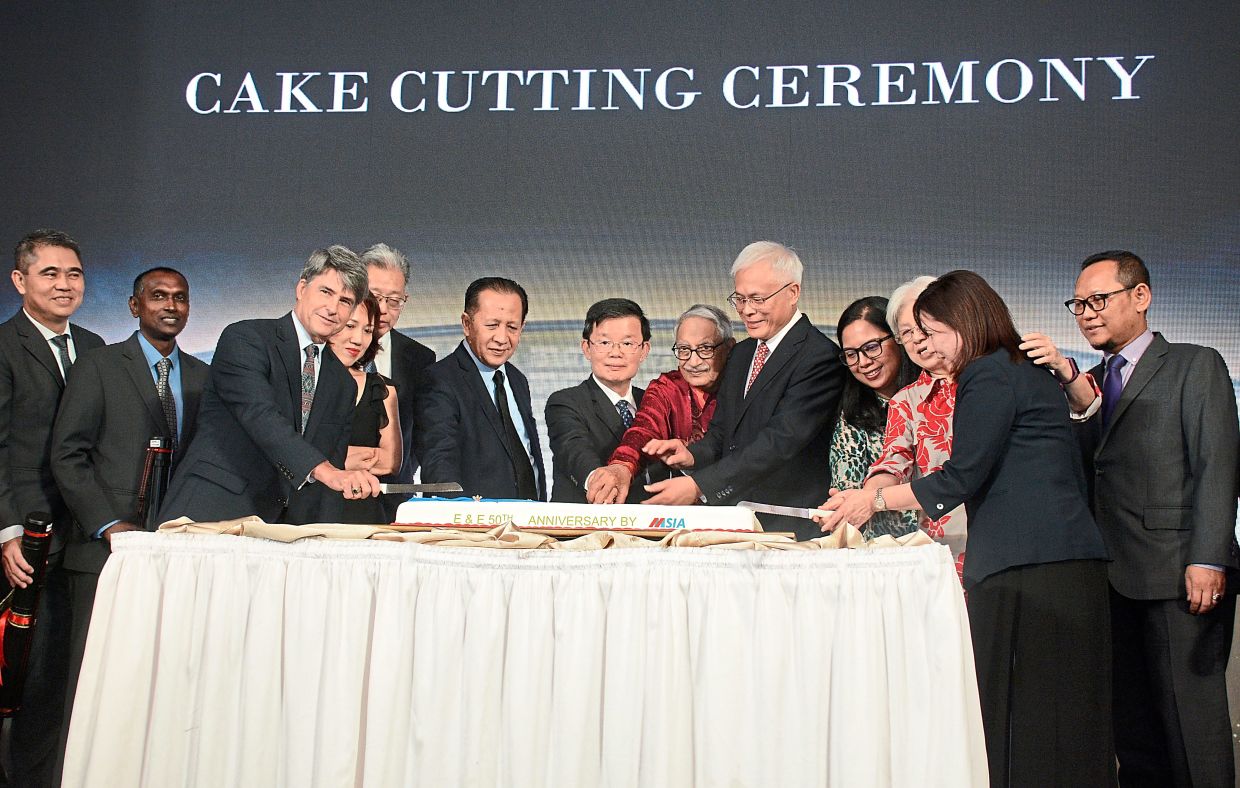 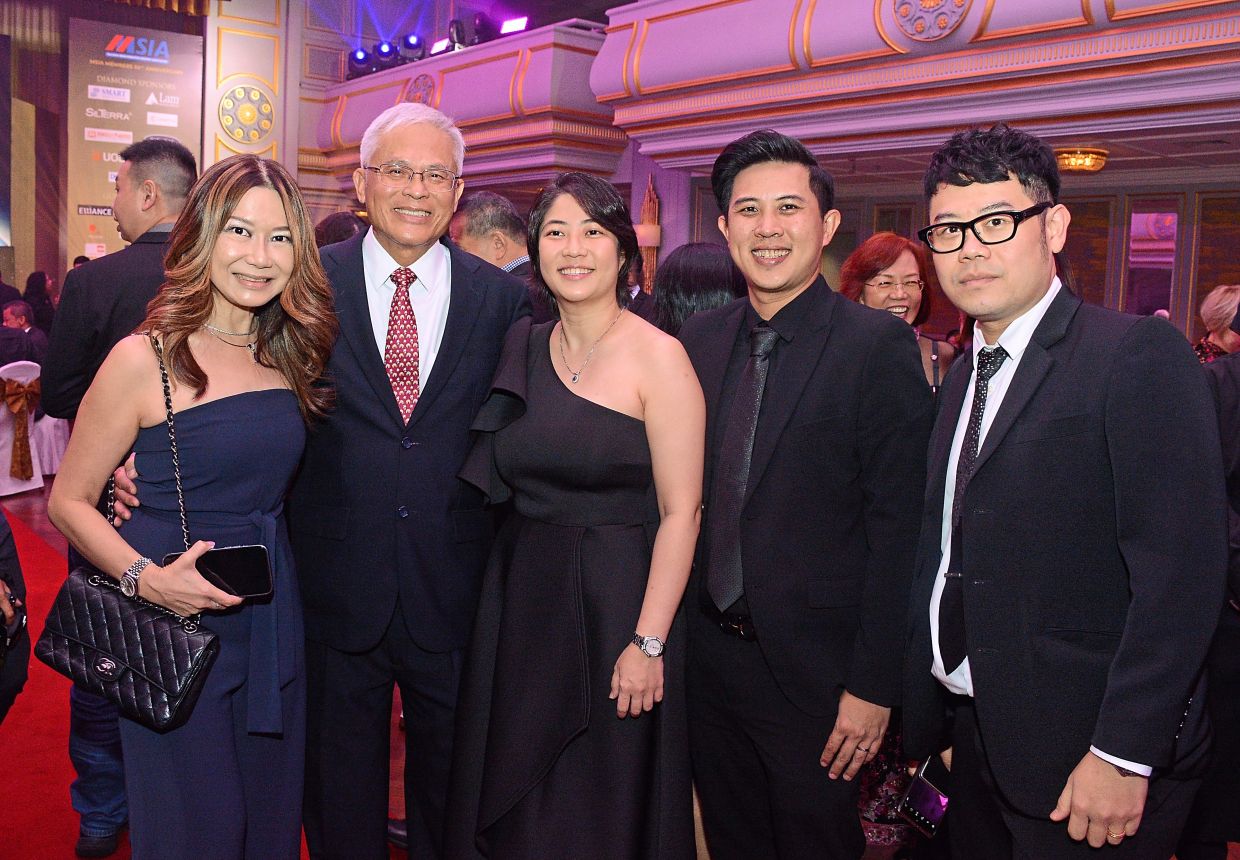 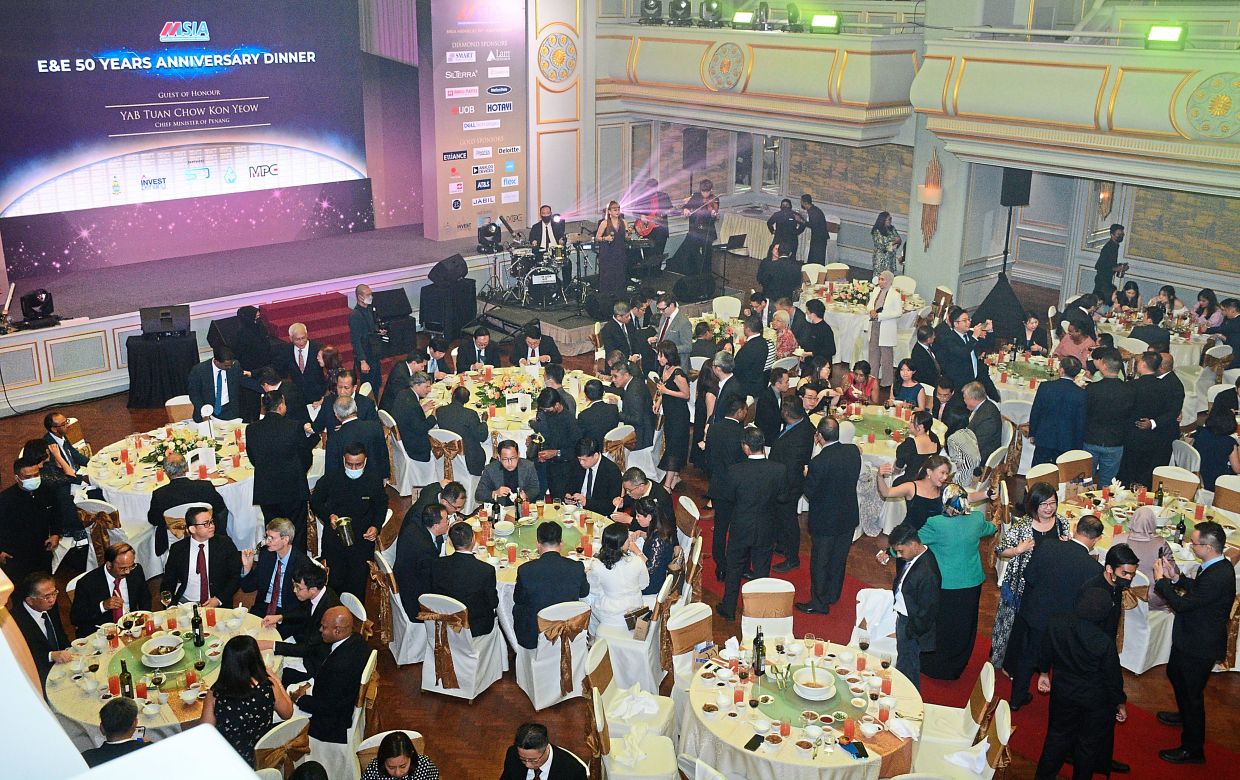 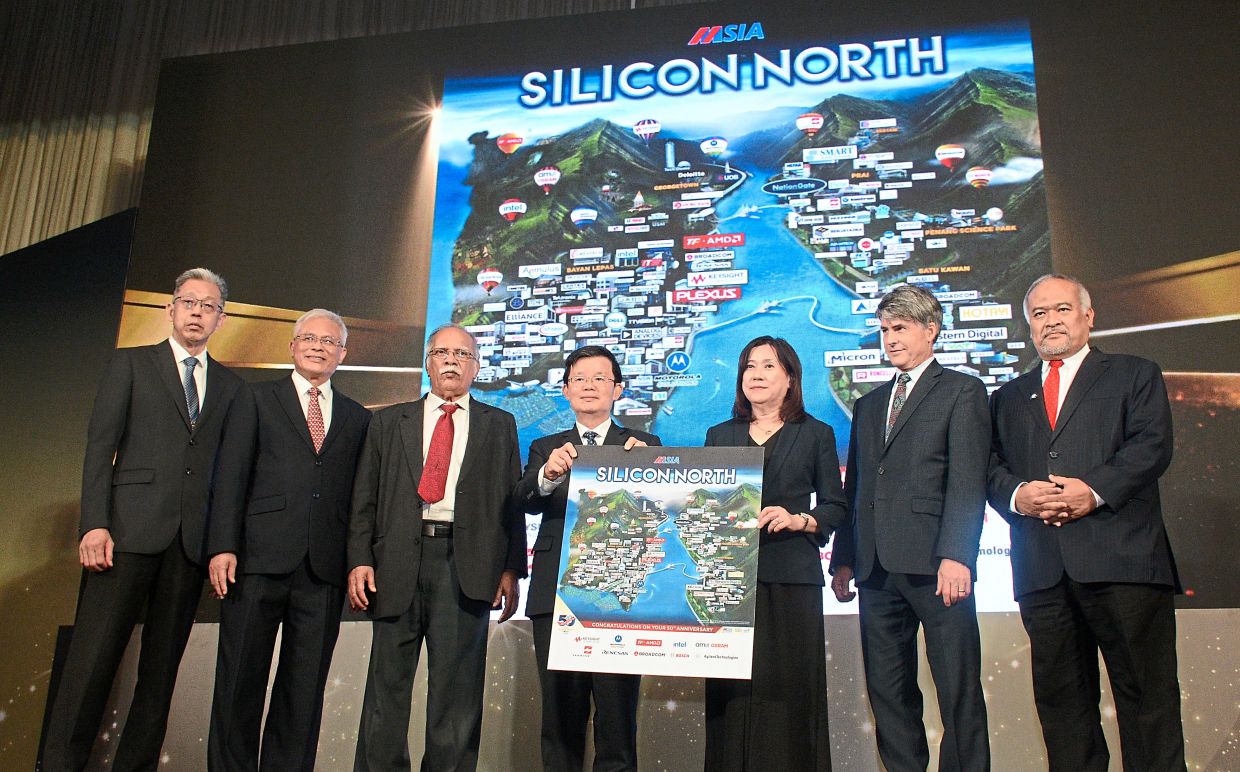 The VIPs along with other government officials and industry leaders cutting a cake to celebrate the 50th anniversary of MSIA Penang E&E during the dinner.

Industry players networking with each other and enjoying their meal during the anniversary celebration dinner. 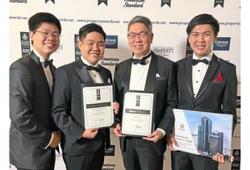 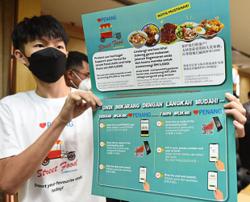