With the project estimated to cost about RM330mil, the UTAR president said there was only about RM80mil left to raise.

He also said that the hospital’s traditional and complementary medicine centre started operating in April this year.

“There have been about 6,000 visits for outpatient services in the past four months.

“The Western medicine centre will be ready by September, and it is expected to start operating in early 2023.”

Deputy Education Minister Datuk Dr Mah Hang Soon, who is also the project’s fundraising campaign committee chairman, said in his speech that he would do his best to get more funds.

Dr Mah also lauded UTAR chancellor Tun Dr Ling Liong Sik, calling him the “Father of UTAR” for his commitment to developing the university, and expressed his gratitude to all veteran leaders at UTAR who were still working hard for its growth.

“In the blink of an eye, UTAR is now 20 years old. The road ahead is still long but I am confident that with hard work and cooperation, we can face any challenges in achieving excellence,” he said.

During the celebration, the dignitaries also launched a bamboo pavilion called “The Gesture”, which is part of the campus’s Bamboo Sanctuary Park to be implemented in the next few years. 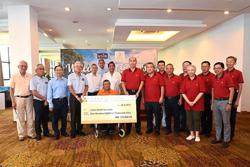 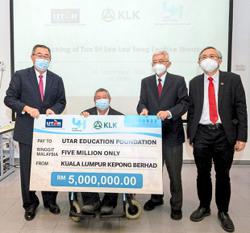