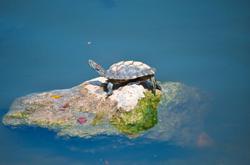 In an earlier story published in StarMetro on Aug 15, park-goers said they saw fishing activity taking place at the lake despite the many “No fishing” signs there.

On Aug 12, a poacher reportedly demanded money from an elderly woman when she told him to return a turtle into the water after he was spotted dragging the hapless reptile along the banks.

A witness said the poacher eventually let the animal go after receiving the money.

In a statement by DBKL, the public was issued with a stern reminder that no fishing activities were allowed in any of its parks.

“Constant monitoring is done to prevent this.

“Those caught will be ordered to leave immediately.

“Those who do not cooperate will have their fishing equipment seized by security personnel,” read the statement.

Park visitors are urged to assist by reporting poaching activities to security guards on duty at DBKL’s public parks.