Lee says during his stint in DBKL board, there was no stringent vetting of backgrounds of individuals appointed to government boards.

Social activist Tan Sri Lee Lam Thye, who was a member of the DBKL advisory board for 16 years, said there was no stringent vetting of backgrounds of individuals appointed to the board during his time at City Hall.

“There was a simple vetting to check if there were any police cases, but that was it. I don’t even remember signing any document of declaration.

“But things are different now with more members being political appointees.

“There should be a proper vetting process in place,” he said, adding that it was necessary for the sake of good governance and to instil public confidence and trust.

DBKL advisory board member Datuk Zainal Abidin Mohd Rafique said he signed a personal declaration every year and opined that others should do the same too.

“The agencies cannot be checking everyone’s background, even though they have a vetting process in place.

“I personally know people who were being vetted to sit on certain boards but then failed the SPRM check, so the onus should be on the individual.

“If he is adjudged bankrupt after his appointment, then he should leave,” Zainal added.

Federal Territories MCA DBKL Affairs Bureau chief Banie Chin said there were also cases of people being appointed to sit on such boards who were cleared at the vetting stage but were declared bankrupt later.

“It happens quite a lot in business, but once you know you are bankrupt you should resign immediately,” he said.

Chin, who was a member of the DBKL advisory board, said it showed that the person was honest.

Lim said DBKL should publicly reveal other appointments and staff who were insolvent.

Lawyer Derek Fernandez said any person holding public office was subject to the Insolvency Act 1967 and if he was an undischarged bankrupt he could not be appointed to any such board.

“If at the point of vetting and being appointed to the board he was not a bankrupt, then this is consistent with his declaration. But if he subsequently becomes a bankrupt then he will have to leave.

“He has done nothing wrong unless you can prove that he was a bankrupt at the time of appointment. Bankruptcy proceedings is a process and takes time and during that time anything can happen in a business,” he said.

Fernandez said when a person was appointed, he or she would have to sign a sworn document.

The agencies will have carried out basic searches to check a person’s background and also relied on his sworn document.

It was reported that S. Gobi Krishnan was appointed to the Kuala Lumpur City Hall (DBKL) Excise Licensing Board while Datuk Affendi Zahari had been Kampung Baru Development Corporation (KPB) chairman, and he was declared a bankrupt last October.

Affendi relinquished his post in June after the matter came to light. The post has remained vacant since then. Both appointments come under the purview of Federal Territories Ministry.

Yesterday, Shahidan confirmed cancelling Gobi Krishnan’s tenure in a statement to StarMetro after getting confirmation from the Insolvency Department. 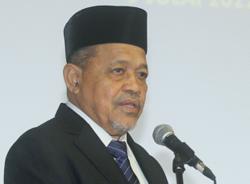